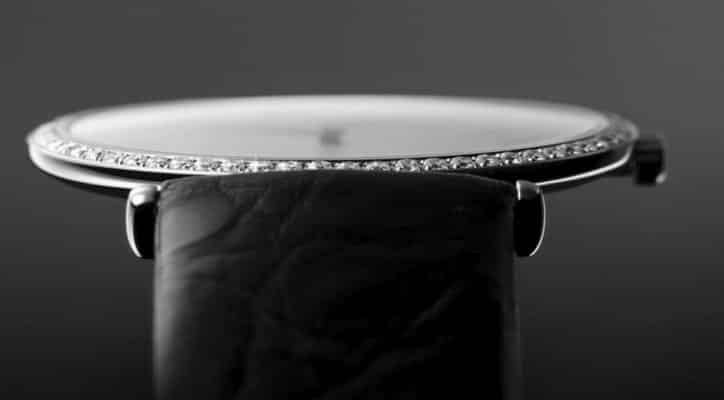 The quartz-powered La Grande Classique de Longines (ref. L4.241.0.11.2) expands the elegant, yet affordable collection from the renowned entry-luxury brand. Like the rest of the La Grande Classique family, the Ref. L4.241.0.11.2 is offered in a relatively small stainless steel case that measures only 24 millimeters (less than one inch!) in diameter and perfectly suits even an average wrist, although it will probably be ladies of smaller stature that the timekeeper will be especially popular with.

Thanks to the use of a Swiss-made Longines Caliber L209 quartz movement that measures just 1.35 mm from top to bottom, the case is not only small: it is also thin being just 4.20 mm in height making it an almost perfect luxury accessory for a person who doesn’t like flashy things, but would still prefer to have a high-quality product from a reputable brand on her wrist.

Together with forty-eight Top Wesselton VVS diamonds adorning its narrow bezel, the new watch gives a lasting impression of refined elegance: a thing that we seldom encounter when it comes to mass-produced goods, even if we are talking about premium-priced watches designed for the better part of humanity.

The thin black Roman numerals that are printed on the matte-white dial are crisp and easily legible and the blackened hour and minute hands are unobtrusive, well-proportionate and perfectly do their job. Even the small setting crown is big enough for the watch to be seamlessly operated when needed.

By the way, while many women’s watches are often powered by simple and cheap movements, the Caliber L209 is in fact based on an expensive ETA E03.001 ebauche, which is known not only for its high quality of build, but is also accurate gaining or losing no more than 2.5 minutes per year.

Of course, such a level of precision doesn’t make the caliber qualify for an official chronometer certificate from COSC, but it comes darn close to it!

At a price of €2900, this is a fairly expensive timekeeper. However, from the point of view of “value for money,” I would probably give it at least four stars out of five. The first of all, the mechanism is surprisingly good: it is light years ahead of those plastic throw-away jobs that often power watches that cost a great deal more. The second is, of course, the styling. While subjective, it is hard to argue that this deliberately modest La Grande Classique looks great and is currently one of the most elegant offerings currently available on the market of “ultra-thin” watches in this price range. And, of course, the four dozens of well-cut diamonds, too, justify the timekeeper’s price.