If you keep a close eye on DeWitt, you probably remember the stately Academia Seconde Retrograde Serenity (refs. AC.1102.48.M030 & AC.1102.53.M040) collection that was revealed around three years ago. This automatic DeWitt Twenty-8-Eight Seconde Retrograde (Ref. T8.SR.001) that the company presented during the Baselworld 2012 show, is basically the same timekeeper, which is now presented in the slimmer, more art-deco-style body. The 2012 version features an outstanding combination of rose gold and micro-blasted titanium: a new scratch-resistant alloy that was originally created for aerospace applications and is ten times harder than standard Grade 5 titanium alloy.

Compared to the Academia model, the new watch not only features slightly (around 0.5 mm) slimmer body but also comes equipped with a thinner fixed bezel, thus, remaining the same 43 millimeters in diameter, offering more real estate for the dial.

Accordingly, the oversized Roman numerals were transferred to the outer ring and are now accompanied by eight small Arabic numerals at the five-minute intervals: another characteristic feature of the Twenty-8-Eight family of watches. 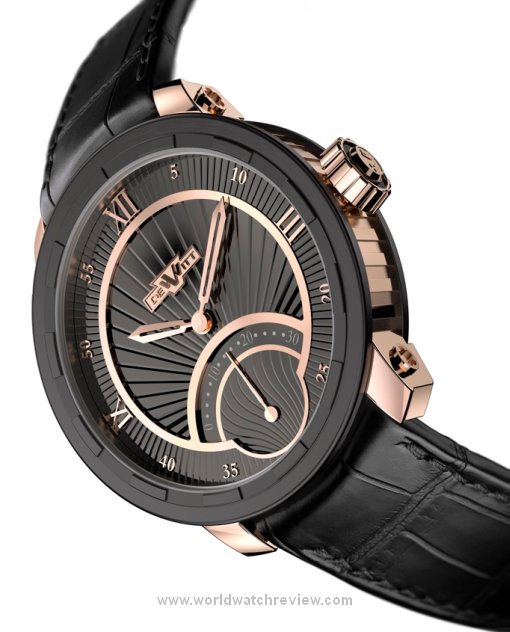 By the way, speaking of the bezel, it must be noted that the part is crafted from Grade-5 Neotitanium material: a usual grade 5 titanium alloy that was treated with high-temperature electro-plasma and anodized offering a winning combination of low density and high resistance to scratches.

As the sensually curved rose gold lugs, the bezel of the piece was polished and micro-blasted in order to produce a silky, soft to touch textures. As to the inner workings of the new Seconde Retrograde, it is powered by the same Caliber DW1102 self-winding movement that animated the Academia version.

Featuring 21 jewels and beating at a pretty much standard frequency of 28,800 vph, this is actually the well-known ETA 2892-A2 caliber that features the same 30-second retrograde small seconds module that was supplied by the Swiss-based complications specialist Agenhor: a small company, which is responsible for the stunning complications that we have seen in 2011 Hermes Arceau Temps Suspendu; the limited edition ultra-expensive Harry Winston Premier Excenter Perpetual Calendar Platinum; and the playful Van Cleef & Arpels Poetic Complication Five weeks in a balloon watches.

As you may have already guessed, it is also the same movement that powered the 2009 version of the timekeeper.

The minimum suggested price for this model is set predictably high at €28,500: normally, you would be charged a similar amount of cash for a “full” rose gold timekeeper with a more interesting movement inside. I would probably be right to call the gadget severely overpriced, but something tells me that in this niche it is more about an artifact’s ‘perceived value’ and your ability to pay the bill rather some vague “value for money” ratio: you either can afford one and are ready to pay or you just can’t. End of story.