Although Roger Dubuis’ press service is still rather tight-lipped about the new RD681 caliber, it is known that the movement consists of 280 components, and bears a prestigious Hallmark of Geneva stamp, which means that the mechanism complies with the highest standards of Swiss watchmaking, and is also an officially certified chronometer. 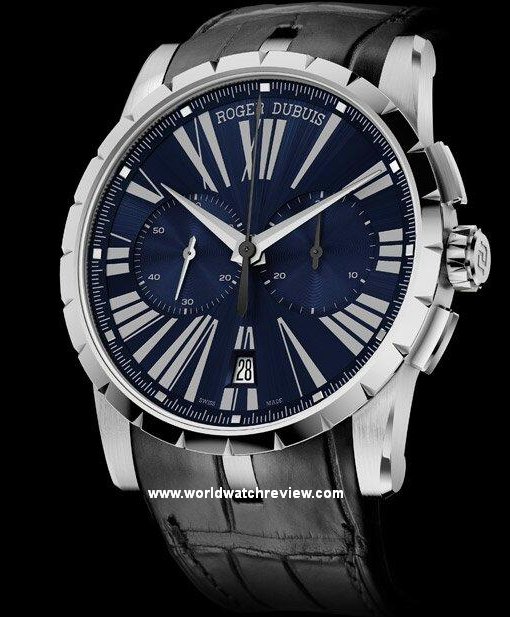 Compared to its siblings, the new watch comes in a slightly smaller body that, while measuring “only” 42 millimeters in diameter, preserves the same basic proportions and sports all the visual styling cues from its older brothers like, say, the triple-horned, slightly elongated (yet still short enough to watch feeling more or less at home even on a narrow wrist) lugs and the famous notched bezel that immediately makes the timepiece to stand out from the rest of them. The crown has shrunk considerably though.

Perhaps, the reason for making the crown smaller and shorter was the intent to make more room for the inconspicuous chronograph push-pieces at 2 and 4 o’clock, yet they somehow made the gadget less easy to operate in the process: the shorter crown is definitely more difficult to grasp if you have relatively thick fingers.

As usual, the Excalibur’s face features a pair of dauphine-shaped hour and minute hands and the familiar Roman numerals that look like they were affected by tidal forces of an invisible black hole right in the center of the dial. Like many other watchmakers, Roger Dubuis tried to visually differentiate the small seconds hand at 9 hours and the 30-minute chronograph hand finishing the latter with the same black coating as the central chronograph second hand. The choice of color, however flashy it is, doesn’t look particularly ergonomic since it will be extremely difficult to use the chronograph in poorly lit places. Well, at least the subsidiary second hand looks just fine.

The Swiss company still doesn’t say a word about the ref. RDDBEX0389‘s introduction day and suggested price, but it is already known that the watch will only be available at the Roger Dubuis boutiques throughout the world.