The new Hanhart Pioneer Stealth 1882 Chronograph basically sports the same layout as their recent Pioneer TachyTele, but comes in a much bigger, bolder body, which is protected from accidental dents and scratches with a mean-looking black DLC treatment: a rare feature in this price range.

As the original Pioneer TachyTele, the new Hanhart Pioneer Stealth 1882 Chronograph features the same bi-compax dial layout, which, at closer inspection, is not the same.

While the former sports a rather simple chronograph function with a 30-minute counter at 3 o’clock and a central chronograph seconds hand, the latter comes with an IWC-style combined totalizer that features a 12-hour and chronograph counter and a small seconds display sharing the same sub-dial at 9 hours.

The 30-minute chronograph totalizer is still at its place at 3 o’clock. 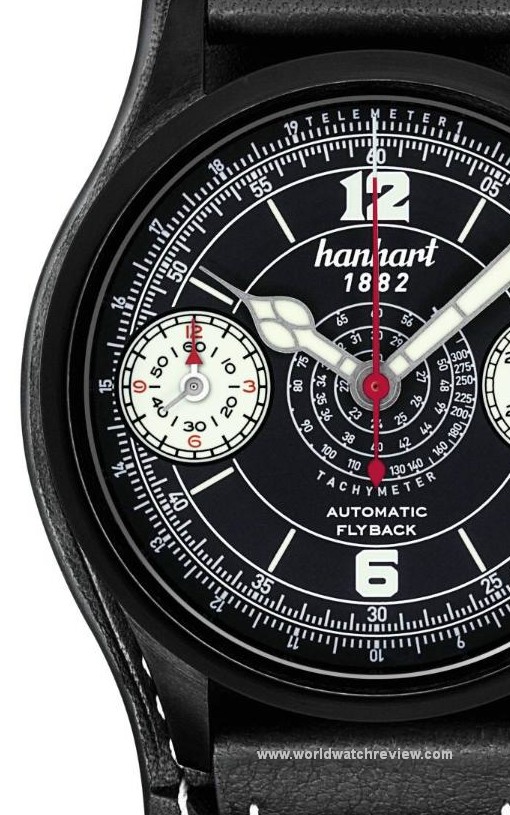 To make the feat possible, the German watchmaker employed their new HAN4312 automatic chronograph movement, which is built on 34 rubies, beats at standard 28,800 vph and has a minimum power reserve of 42 hours.

I am not sure about the origin of this caliber, but I have a feeling that it is, in fact, a slightly modified ETA blank movement or, perhaps, one of its numerous clones.*

Well, at least Hanhart says that the movement was made in Switzerland. The caliber is hidden inside a rather large stainless steel case. Exactly 45 millimeters in diameter, the case sports the signature notched bezel with a red element at 12 o’clock and a pair of chronograph push-pieces at 2 and 4 o’clock (one of them is, too, of the same blood-red color.)

Together with the rugged black leather strap that features contrasting white stitching, the watch looks even more brutal, although the white sub-dials somewhat diminish its military-style charm.

Since the watch was created to celebrate the 130th anniversary of the brand (as the name implies, it was established in 1882,) Hanhart decided to limit the timekeeper’s production at mere 130 pieces.

Taking into account the fact that the wristwatch will be offered at a price of less than €3700, I assume that the Pioneer Stealth 1882 will be sold out fairly quickly. This basically means two things. First, its resale value won’t bomb as quickly as it is often the case with other timekeepers from the second-tier luxury brands, and, second, you will need to move pretty fast if you don’t believe in buying used luxury item and would prefer to get one from an official store with all the necessary papers, tags, and plastic protective covers staying on their relative places.

*UPDATE: Okay, it looks like the movement is based on the Swiss-made ETA Valjoux 7750 natural-born chronograph caliber.