Offered in plain and black ion-plated stainless steel, the Casio G-Shock Metal-Twisted (MTG-S1000D-1AJF) not only offers their solid Triple G Resist shock-protection technology and lots of useful functions, but also packs them in an impressively designed, massive body that makes your normal “sporty” chronograph look like a real pussy near this rugged giant.

As usual for the G-Shock series, the MTG-S1000D-1AJF arrives in a deliberately oversized body. Well, not just plain oversized. Every sharp angle, every polished screw-head, every machine-brushed surface not just snarls, screams “brutality”. Every part of this timekeeper is exaggerated starting with a huge setting crown with gigantic crown guards protecting it from shocks, and going all the way down to an immense body 53.5 millimeters wide and massive bolts that keep the heavy bracelet attached to the polished lugs. And you know what? I kind of like this design. Unlike many previous and current members of the vast G-Shock family, this particular watch doesn’t look meaningless in its almost hyperbolic enormity.

In fact, I can easily imagine an owner of a Star Raider or a Kawasaki VN900 Custom or some other Japanese cruiser (not so sure about the guys that ride Harleys, they would probably get better off with something simple and even more expensive like, say, a Panerai Luminor Marina 1950 3 Days Limited Edition (PAM 422)) wearing on his or her wrist this Japanese monster with its polished surfaces matching those of thick exhaust pipes and air filter.

Despite its extremely large size, the watch actually looks great on a normal wrist. While a supersized Swiss-made timepiece (like, say, anyone, which is made by the aforementioned Panerai or some other modern luxury brand) often makes an impression of a normal sporty timekeeper whose dimensions were simply increased in a CAD program and thus in many cases makes its owner look a bit ridiculous, this new gadget was actually designed to be big. It’s like a well-built semi-truck: it is surely big, intimidatingly so, but all of its carefully chosen proportions actually make it look wonderful. Unlike other G-Shocks that often feature LCD displays, this full-analog Casio MTG-S1000D-1AJF doesn’t offer an absurdly long list of functions limiting those just to a bunch that you would want to have on a normal timekeeper.

There is a 1/20th of a second precise chronograph, a world time indicator with 29 time zones, a beeping alarm, a full calendar that needs to be set up only once, and, of course, a battery end-of-life indicator that lets you know when you need to subject the timekeeper to the sun or some source of artificial light (yes, the model is equipped with their proprietary Tough Solar movement.)

The movement, by the way, supports their own Multi-Band 6 atomic timekeeping with radio-controlled time/date updates, but even if you happen to live in an area that isn’t covered with the towers that send calibration signals, it is not a problem. According to Casio, the multi-motor mechanism loses or gains no more than 15 seconds per month, which makes it an accurate keeper of time.

Currently, the model in stainless steel will set you back at just $900. A version in the ion-plated black body will be $200 more expensive. 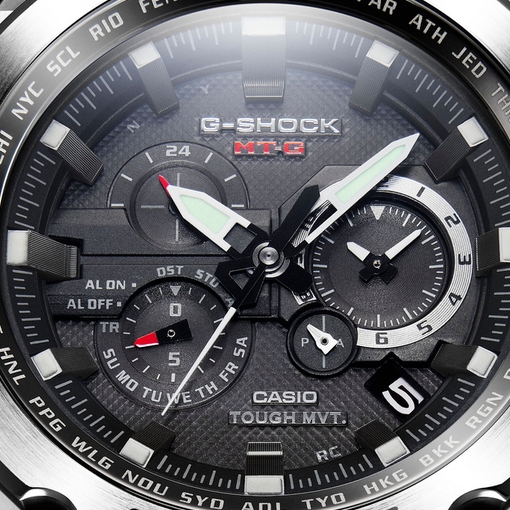