At a first glance, the 2013 hand-wound Arnold & Son DBS (Ref. 1DSAP.W01A.C120P) looks like it was inspired by the ultra-expensive Jaeger-LeCoultre Duometre family. It is, in fact, a tribute to a pair of much older timekeepers made by John-Roger Arnold between 1796 and 1799 respectively. Both watches were able to display mean solar and sidereal time on two separate sub-dials and featured an ingenuous bimetallic thermo-compensated Z balance. 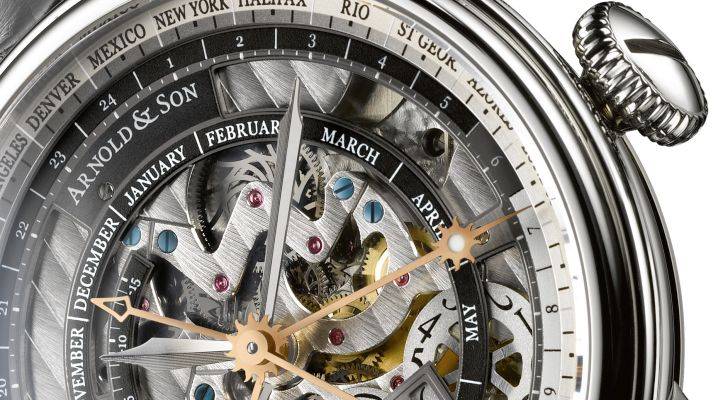 For the year 2012, the British watchmaking house has prepared yet another version of their outrageous Hornet collection of “world timers.” The 2012 Arnold & Son Hornet World Time Skeleton features the same impressive body of gargantuan proportions, which is now crafted from stainless steel and features an open-worked dial that makes quite a dubious impression. The British watchmakers Arnold & Son have just released a new, interesting timepiece that sports a complication you will rarely see in timekeepers from major watch manufacturers. As one can gather from its name, the sporty hand-wound Arnold & Son True Beat 88 (Ref. 1TBAP.B01A.C113A) features a “dead beat” small seconds hand that makes precisely 60 jumps per minute.