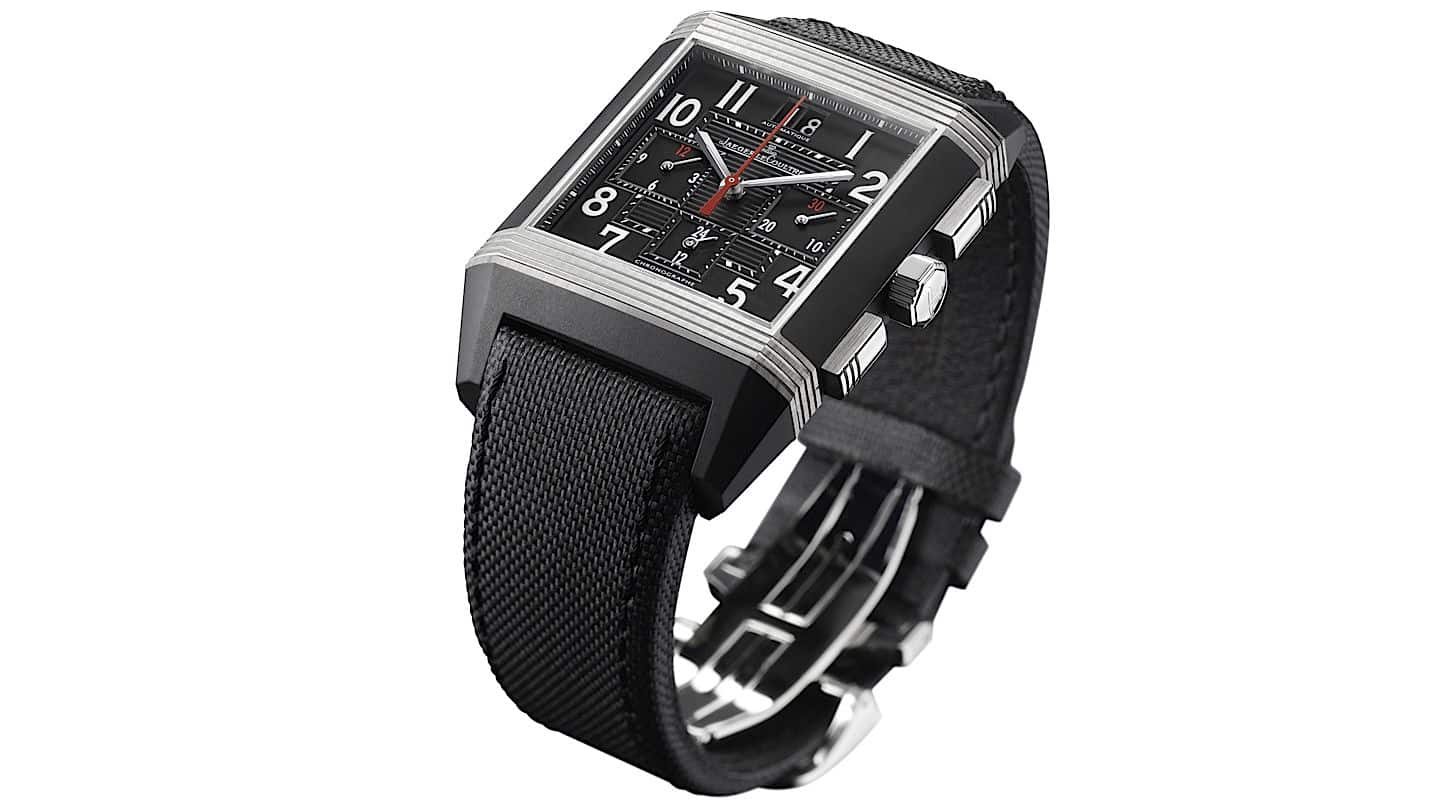 Deliberately massive and even a bit brutal, the new Jaeger-LeCoultre Reverso Squadra Chronograph GMT Palermo Open was designed for those who think that an average Reverso model is just too refined for a modern man. While its size may scare away some customers, the watch has a good chance of becoming yet another iconic model for the brand.

For this year, Jaeger-LeCoultre has presented a new special edition version of its unique Reverso series that combines an in-house column-wheel chronograph movement, a useful second time-zone display and almost three days of guaranteed power reserve.

Developed together with Adolfo Cambiaso, a professional polo player occupying the third position in the official WPT ranking, the new Jaeger-LeCoultre Reverso Squadra Chronograph GMT Palermo Open is the first model in the series that features surfaces coated with black rubber.

Not only the black resin elements protect this extremely well-design stainless steel body from accidental scratches, which is a must for a watch that is supposed (albeit only theoretically) to be worn by athletes that are engaged in one of the most dangerous sports, but they also look cool accented by brushed steel of the case itself.

Just like other models in the series, the new JLC Reverso Squadra Palermo Open is powered by the well-known JLC Calibre 754 in-house automatic movement.

Featuring a twin-barrel energy storage system, the movement has a power reserve of impressive 65 hours (compare that to usual 42 hours of the omnipresent ETA movements) and features a column-wheel chronograph complication and a second time-zone function (for some reasons usually referred to as GMT) displayed on the square-shaped sub-dial, which is conveniently placed at 6 o’clock.

With the mechanism, come a bit of a disappointment. While dealing with Jaeger-LeCoultre, one always expects their mechanisms to feature an almost stunning level of decor, this one looks a bit Spartan with its skeletonized oscillating weight and nothing more than vertical Geneva Stripes on the bridges, as well as many blued screws. Although I get the idea behind this move (a deliberately laconic watch must be powered by a deliberately reserved movement), I get the impression that this time they a bit overdid it.

Still, I must admit that this “technocratic” approach to decor somehow works: restrained and up to the point, it is efficient and minimalistic reminding a bit of an engine of a German sports car from the 1930s.

Although the Reverso line usually comes with solid case backs, this particular version is equipped with a sapphire crystal that provides a superb view of its movement.

To further underline the sporty ambitions, JLC has equipped it with an “ultra-rugged” strap made of some synthetic fabric. Hopefully, the strap is not only rugged but is also sweat-proof.

The rest is simple. The Palermo Open Edition features a familiar dial layout with a tri-compax chronograph and a big date window at 12 o’clock.

Jaeger-LeCoultre plans to issue the watch in two versions. The most expensive model in a rubber-coated pink-gold case will be limited at only 500 pieces. The more democratic stainless steel model will go on sale unlimited.