Oris has devoted the 2010 limited-edition BC4 RHFS (ref. 674 7616 4284 Set) chronograph to the 4e Régiment d’Hélicoptères des Forces Spéciales (4th Special Forces Helicopter Regiment) that was established in August, 2009 and is now based in Pau, Pyrénées-Atlantiques. Despite being an “aviator” (well, it is not your classic B-Uhr, but it is still styled like a plane’s instrument gauge,) the new BC4 RHFS is presented in a comparatively compact body and is equipped with a natural-born chronograph movement.

For a reason unknown, Oris has ditched the compass functionality of the original BC4 Flight Timer for their chronograph line, so the extra crown in the upper right part of the case that provided the watch with much of its mojo and originality has also gone. 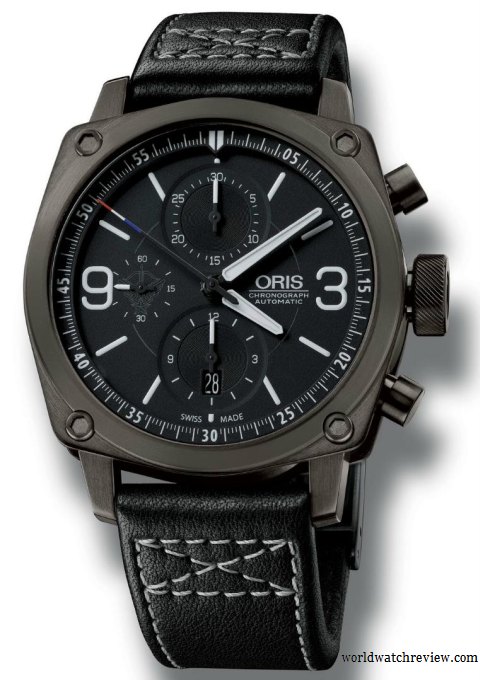 However, thanks to its 42.7 mm stainless steel case covered in gunmetal PVD coating and a color scheme of its large dial, the BC4 RHFS still retains some of the masculinity of the original model. The effect, by the way of speaking, is further emphasized with the timekeeper’s extra-large lugs: while not long, they are massive making the case look even more impressive on a normal wrist. Still, it somehow doesn’t look too big, partially thanks to its more or less average lug to lug length of just over 51 millimeters. While measuring almost 17 millimeters thick, it is more suitable to be worn with casual dress, I can imagine wearing one with something more formal although you would need to be dressed really sharp for this massive accessory to look like a nice accent, not a sign of bad taste.

While most “military” watches use bright white Superluminova to cover the hands, hour indexes and/or numerals, this model uses a lot more subdued black-and-light-gray color scheme that makes the BC4 RHFS look even more menacing, if not downright intimidating.

Unfortunately, the rest is pretty simple and, frankly, rather boring. Just like about 99 percent of available chronographs on the market, the Oris BC4 RHFS Limited Edition uses a standard chronograph movement made by ETA.

In this particular case, it is a well-known ETA Valjoux 7750 base caliber, which defines the standard tri-compax dial layout with a 30-minute totalizer at 12 o’clock, a 12-hour subdial at 6 o’clock and a small second hand at 9 o’clock. The small date window inside the 12-hour subdial is also standard for the movement.

Well, if you are not a collector, and if you prefer time-proven design and reliability to originality, then the use of the 7750 is, perhaps, a good thing. At least, you will not have any trouble with servicing or repairing the mechanism in your town.