Although Mr. Coste needed to swim for only 75 meters to set the world record, he doubled the distance. Just to make sure.

It must be noted that, while assisted by a team of professional rescuers, the Venezuelan diver was taking a significant risk going underwater without scuba equipment, since the assistants didn’t have a supply of extra oxygen with them.

If anything went wrong, his only hope would be to get him to surface as fast as they could. And it is difficult to move fast through a system of caverns filled with water.

So, Mr. Coste is indeed a brave man.

Limited to 2000 pieces (which means that most people will not have problems finding it in the foreseeable future,) the watch will be delivered in a special presentation box.

Inside the leather box, besides the timekeeper, you will find a replacement black rubber strap with a comfortable-looking folding clasp, multipurpose soft pouch, tools for the bracelet change and an inevitable limited edition certificate. The watch itself looks like a refreshed version of their gorgeous 51 mm Oris ProDiver chronograph, albeit smaller, more refined.

It is, too, issued in a multi-piece titanium case that has been reduced to less intimidating 46 millimeters in diameter.

The rotating diving bezel is still made in black ceramic with a titanium notched ring that makes it easier to operate.

The hour markers have also become more interesting to look at.

Shaped like hollow-point bullets, the indexes are now more dynamic, providing the diving tool with a more aggressive, even menacing look.

The dial was also changed. 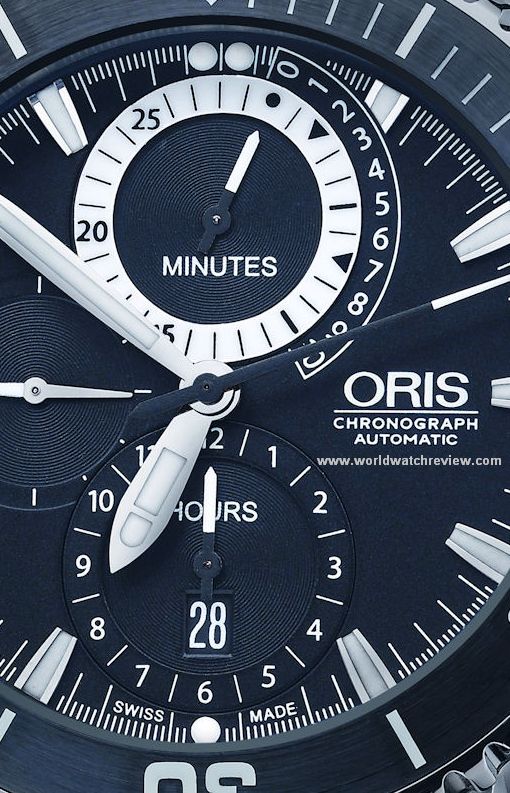 Although the timekeeper’s face lost some of its family features (like the usual wave pattern on the dial and the lifebuoy-shaped sub-dial rings,) it now better suits the image of an adventurous diver, literally radiating testosterone.

It must also be noted that the special-edition model is not just about the cool looks.

Equipped with a helium escape valve (at 9 o’clock) and sporting a thick sapphire glass as well as a solid, screw-down case-back, the watch is good to descent down to as deep as 500 meters!

Well, that’s not as deep as the recent Hublot King Power Oceanographic 4000 can go, but still impressive!