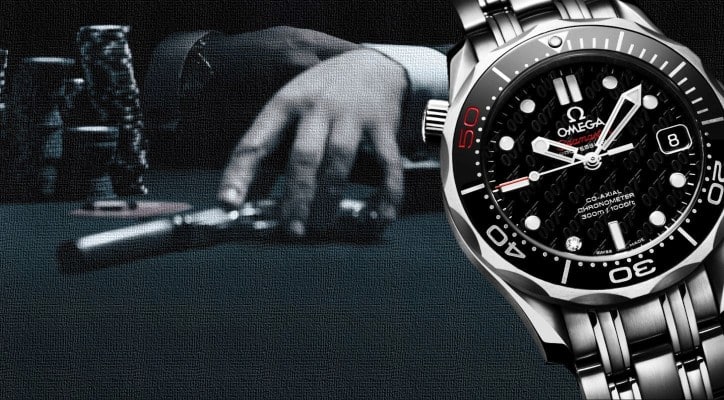 Celebrating the 50th anniversary of the legendary franchise, the Swiss watchmaker has released its new Omega Seamaster 300M James Bond 007 50th Anniversary Collector’s Piece diver. Sporting numerous references to the immortal franchise, the device may be of great interest to the huge crowd of fans. As one might have expected, the new timepiece was presented by Mr. Daniel Craig himself.

During the fifty years of his brilliant career, Mr. James Bond has changed many different watches (including quartz and even digital.) For the most die-hard fans, his persona is mostly associated with Rolex divers. However, for the last 17 years, starting with the Pierce Brosnan era, the most famous MI6 agent wears different versions of Omega Seamaster. As many recent divers from Omega, the bezel features a black ceramic insert with its standard diving scale painted in matt chromium nitride. You may have already noticed that that the number “50” was rather suggestively printed in red.

As usual, the black lacquered dial is studded with numerous 007 monograms, while the smaller version even has one its round hour markers at 7 o’clock replaced with a small diamond.

The last piece of decoration that refers to the series is the screw-in case back. Too, crafted from stainless steel, it features the famous gun-barrel motif stamped on its surface, as well as a small cutout dead in its center that provides a good view at the centerpiece of the oscillating weight. Guess what, it is decorated as a 9 mm “bullet”! Despite numerous visual distractions, the design of the dial is traditionally good. Its hands and hour markers are generously covered with white Superluminova (however, it glows blue in darkness,) which makes it easily readable both during the day and in the night. Or deep underwater, since the Seamaster, as usual, has an impressive water resistance rating of whole 300 meters.

Of course, designed for such frightening depths, the watch is equipped with a special helium escape valve. Placed on the side of the body at 10 o’clock, the valve prevents the sapphire crystal from popping out during fast decompression.

Originally, the watch sported a suggested retail price of $5200 and was available on Amazon.com and other online retailers at some $500 less, but now seems to have been totally sold out although you can still find used ones in mint condition if you search long enough.