As usual, the new timekeeper is available in two versions: a dressy rose gold and understated stainless steel, which may be especially desirable for those introverted individuals who want to feel a piece of fine mechanics gently hugging their wrist, but wouldn’t care to draw too much attention to it. Although a classic dress watch usually has its functions limited to displaying hours, minutes and, sometimes, seconds and date, this one adds to the mix an easily readable power reserve indicator.

Surprisingly, despite having three sub-dials on its eggshell-white dial, the watch doesn’t look like overloaded with functions. Perhaps, the reason for this is that the five hands are successfully differentiated from each other with their colors and shapes.

The rose gold, dauphine-shaped hours and minutes hands, for example, are superbly matched by similarly shaped applied hour markers that are crafted from the same precious metal. The indicators on the power reserve, date and small seconds sub-dials (placed at 10, 2 and 6 o’clock respectively) have their steel hands blued and also sport different shapes: the first two are leaf-shaped and the last is the baton-shaped. Although these hands look a lot more contrast on the clean, spotless dial, it is immediately clear that they play on the sidelines.

According to JLC’s press release, the watch, which has become slimmer than the previous model and now measures less than 10 millimeters in height and 39 millimeters in diameter, still features the same JLC Caliber 938 automatic movement. Although Jaeger-LeCoultre tries to position it as an ultra-thin movement, it is not exactly so. At 26 millimeters in diameter, the cal. 938 is 4.9 millimeters high, which makes it even thicker than the mass-produced ETA 2897 blank caliber that, too, sports an automatic winding system and sports the same basic functionality.

On the other hand, comparing the two is like equating a Bentley Continental GT and a VW Beetle on the merit that both cars have four wheels, two doors, and one internal combustion engine. 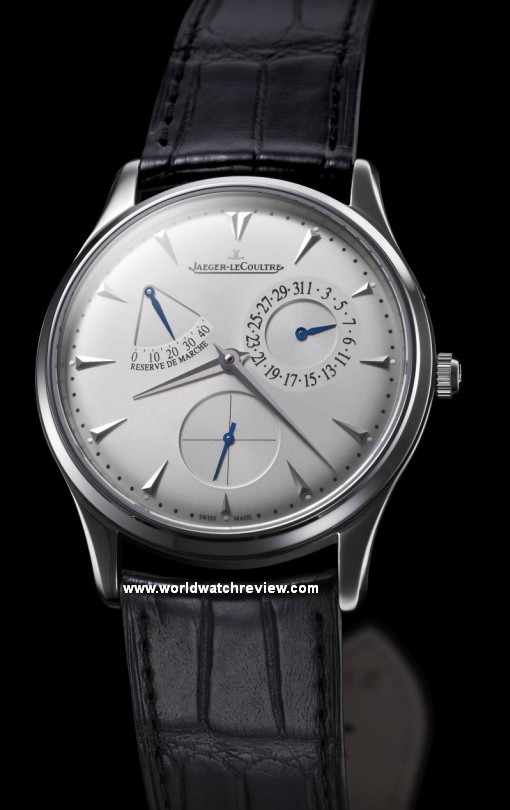