Summer is still far from over and Citizen has a nice model to offer the constantly growing crowd of budget-conscious amateur divers. Their new Citizen Scuba Fin Eco Drive diving tool comes equipped with the “green” solar-powered quartz movement that runs for almost whole six months after being fully charged and its built-in battery never needs to be replaced. Claimed to work for as long as 20 years without losing its properties, the battery has a good chance of outliving the watch itself.

When the Japanese brand introduced their Citizen Eco-Drive Signature Perpetual Calendar diving watch last year, there was a considerable amount of hullabaloo in the watch-loving crowd with a number of bloggers and twitters claiming that the watch was inspired, to say the least, by the elegant TAG Heuer Aquaracer 500M Calibre 5 automatic diver.

Looks like this time Citizen learned its lesson and decided to introduce a new watch that, while still looking like an homage to a classic Rolex Submariner diver, brings in the brand’s own DNA. I mean, although the unidirectional rotating bezel, the pair of crown guards and even the luminous hour markers on the dial look too generic, a couple finishing touches here and there make this watch easily noticeable among the hundreds of similarly designed diving companions.

Like many divers, the new Citizen Scuba Fin is large measuring 46 millimeters in diameter, but, thanks for its quartz movement, is also thin measuring some 12 millimeters in the thickest place. Thanks for the choice of proportions, the setting crown, which, like the rest of the body, is treated with black ion plating, is large and will be easy to operate even if you happen to possess a set of clumsy fingers. Frankly, like many other Japanese watches in this price range, the new Scuba Fin looks a trifle fussy with its clumsy, extra-wide polyurethane band that, besides the more or less discrete version in black, comes in bright colors that match similar patches of paint on the dial, as well as the hour and minute hands that, too, feature unnecessarily complicated design.

Still, if these minor visual annoyances don’t bother you, go ahead and have a look at one at a brick and mortar shop: this big baby certainly deserves a second glance. And with a price of below $300, this new Scuba Fin Eco-Drive looks like a nice catch. 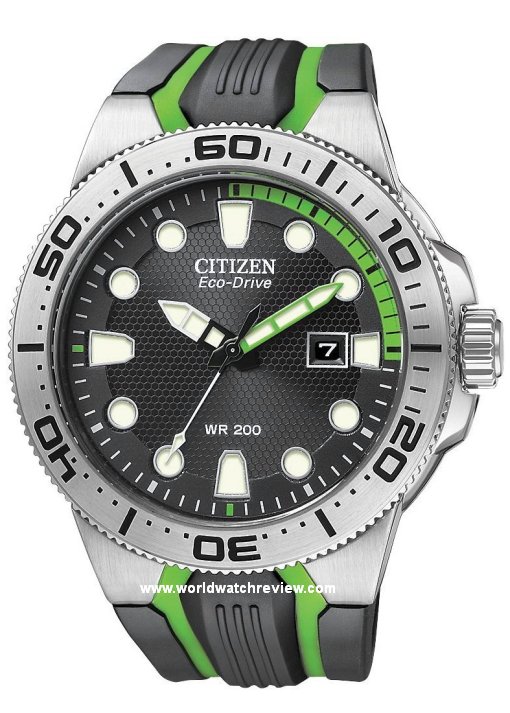