Unlike the much-awaited Apple Watch (we will see it in a matter of hours), the 2014 Breitling Colt Caliber 73 SuperQuartz Chronograph doesn’t need to try to destroy the competition.

With its classic massive body, easy-to-grip unidirectional rotating bezel, and traditional high-contrast dial, the new Colt delivers everything you ever wanted from a Breitling but never was quite ready to pull the trigger on their more expensive models. The device won’t stun you with the same level of craftsmanship as an automatic mechanism decorated by a skilled hand of an artisan but instead will offer you an almost unrivaled level of precision and dependability.

As Breitling tactfully hints in its press release that accompanied the launch of the 2014 Colt Collection, the original timepiece had been originally developed as a true “military” watch. It was the model’s overall success of a more or less affordable, entry-level Breitling that the device has finally become a luxurious accessory.

Indeed, by packing the brand’s core DNA into its mildly oversized body and offered at a relatively low price, the watch was destined for success. For this year, the chronograph version, as well as the three-handers, has received a minor, cosmetic update that somehow makes the watch look different, and in a good way, too.

While it is still powered by the same well-known Caliber 73 thermo-compensated quartz (Breitling prefers to call it SuperQuartz for its dramatically increased accuracy compared to other, less expensive quartz mechanisms) chronograph, which is based on ETA Thermoline 251.232 caliber, the watch comes in a slightly different body. As usual for the brand that prefers evolutionary changes to chaotic fluctuations that many of its competitors are known for, there are only minor differences here and there that nevertheless make this watch feel fresh. If you compare it to, say, ref. A7338710-C848SS, you will notice that the bezel was replaced in favor of a more classic job making it more in line with their current Chronomat and Avenger models. The crown guard is, too, different and is also more functional not only protecting the fragile mechanism from accidental bumps but also making using the part more comfortable.

For the dial, the Swiss watchmaker uses the same traditional high-contrast layout with huge hour markers sporting enough lume to light a small bedroom and the hour and minute hands wide enough to be easily readable, but still thin enough not to obstruct a view of the chronograph totalizers.

The counters, as usual, are painted with contrasting colors, which in this particular case beige against matte black.

At 44 millimeters in diameter, the watch looks quite prominent, especially on a small wrist, but thankfully not ridiculously so. As you can see on that promotional wrist shot photo a couple of paragraphs above this one, you will notice that on a wrist of a grown man the new Colt simply makes an impression of a time-measuring tool, which is deliberately massive, but somehow manages not to overdo it.

The proportions are well thought-after and the black rubber strap is just wide enough for being comfortable (frankly, I am not as sure about the version with a metal bracelet: it might get a bit too much for a guy with normal hands.)

Still, as always, it would be a good idea to try one on your own wrist before ordering one online. 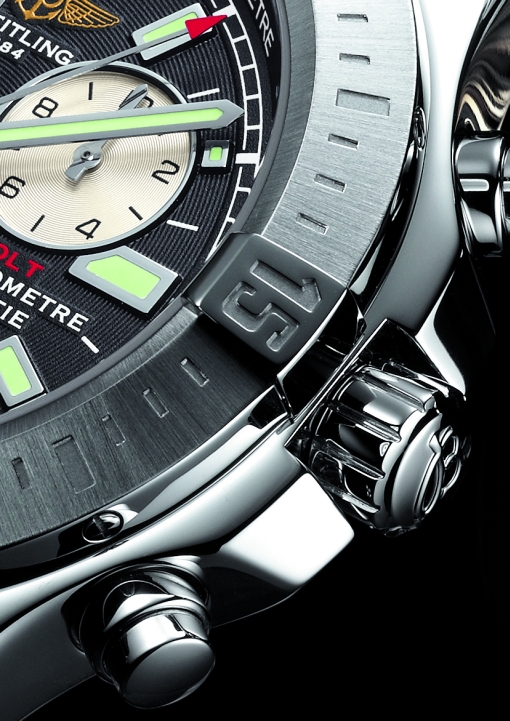