While not as stately as their Royal Manufacture line, the Eterna Super Kontiki family of deliberately oversized timekeepers still makes a strong impression, especially on those more interested in classic models of “the time past” but on a new technological level.

With their monobloc-style stainless steel cases looking like they were inspired by timepieces from the 1970s, members of the Super Kontiki range look almost timeless. While most “trendy” wristwatches of our time will probably look either ridiculous or plain boring in a couple of decades, these gorgeous models will still be relevant with their ergonomically shaped bodies and relatively easy-to-read dials. Being as deliberately massive as it is, this particular gadget isn’t as versatile as similarly styled models offered during the last five or six years by other -less and more expensive- brands. However, that isn’t a big problem since it’s also not positioned as a “My First Swiss Made Diver,” but rather as an entry-luxury accessory for a person who already has several fine wristwatches in their collection and simply needs something original and interesting for certain occasions and certain types of attire.

Although the model’s recommended minimum street price severely damages its “value for money” rating (I wouldn’t give it more than three stars out of five in this regard,) it may still be a good choice if you will manage to find one with good a discount or simply wait some time until it arrives at online stores with a good reputation and acceptable money-back policy.

People at Eterna either have never heard of the current “downsizing” trend or simply refuse to believe that it will last: after all, there are a lot of people who think that the oil has finally bottomed out and the demand for all things luxury (as well as conspicuous) will soon follow. Anyhow, the collection arrives in a seriously oversized stainless steel case of whole 45 millimeters in diameter. Being more than 16 millimeters thick, it looks massive -even for a diver- although, featuring integrated lugs and thus having its length limited to less than 51 millimeters, it still doesn’t take too much space on a normal wrist.

The ergonomics is convincing: the winding/setting crown is massive enough to be easily operated even by short, stubby fingers although some may find that the long chronograph push-pieces feature too much travel for their taste. To yours truly the pushers also look sort of generic, but that’s my personal preference. The case sports a fine brushed steel finish. The texture not only makes the watch look even more elegant in that sporty, masculine way but also plays nicely with an exterior finish of the mechanism, as well as of the internal bezel flange that seems to be first brushed, then anodized and color-matched to the dial and the unidirectionally rotating bezel with its traditional diving scale.

Alas, even despite the outrageously high price that this new Eterna Super Kontiki Chronograph commands, the bezel features neither sapphire nor even ceramic inlay, which is certainly a pity now when you can get the finish even with sub-$1k timekeepers. Otherwise, the collection looks impressive and classy.

Unlike many divers that often feature solid case backs with nothing more than fancy engraving, this particular model comes with a sapphire crystal in its case back cover which is, too, nice: it is always a pleasure to take an occasional look at the piece of fine machinery that makes a gadget tick.

If you don’t care for the black rubber strap that comes with the gadget by default (ref. 7770.41.49.1382, pictured,) you can always opt-in for a lot more interesting stainless steel mesh bracelet that, by the way, comes with a standard folding clasp (this version has a reference number of 7770.41.49.1718.) The bracelets are well executed, look good and I’ve never heard people complaining about their quality: Eterna seems to outsource it to the same manufacturer who supplies the well-known ‘Milanese’ bracelets to Omega and, apart from different logos on folding clasps and a marginally better finish on those with the familiar Omega stamp, they appear to be virtually identical.

The chronograph still sports the same easily recognizable dial that fans of the Kontiki and Super Kontiki series love so much.

Since this watch poses as a hard-core diving companion (although, with its water resistance rating of just 200 meters, it isn’t a true diver after all,) it is nice to note that it also offers one of the most readable dials in the niche. The face maybe not be as clean as those offered by some other brands, but, first, it is an interesting attempt to combine the Kontiki series’ original design language with vintage styling and, secondly, it is still easy to read not only in broad daylight and in total darkness but also muddy waters (not the bluesman) if you are brave enough to get this almost $5k model for a brief and relaxed snorkeling exercise.

The effect comes courtesy of the extra-narrow chapter ring: printed on the internal bezel flange using short, hair-thin strokes, it plays nicely with the combined chronograph sub-dial that features co-axially mounted minutes and hours display. As always, the combined display not only looks cool but also allows you to read the chronograph at a single quick glance, which is great if you plan to use the function regularly (although I can’t imagine why would you do that.)

I think I would have lived without the Rolex-style inscriptions on the upper and lower halves of the dial, and it would be nice if the numerals on the calendar wheel were just a tad larger while the white rims on the sub-dials were a tad narrower, but otherwise, the dial looks close to impeccable within the constraints of the “vintage-look” styling chosen by the design team.

Even in this price range, a great number of chronographs are powered by ETA blank calibers with third-party add-on modules riding atop them. Not with this piece!

Inside, is a self-winding, in-house Caliber Eterna 3916A that was developed by Eterna to achieve relative self-sufficiency when it comes to making their pieces tick and, probably, to establish a secondary source of steady income.

It’s interesting how Eterna applied strategic thinking while developing the movement. While most brands usually first make a base caliber and only later start to scratch their heads when the time finally comes to make complication modules for them, Eterna designed the modular movement from the ground up to make as many versions of it as possible starting from simple three-handers and going to chronographs, big dates, second time-zone watches, and the likes. All in all, the mechanism can come (again, Eterna sells them to third-party manufacturers although I can’t say how many smaller brands prefer to buy their engines from this relatively new player) in 88 variations, all of them good at keeping time and offering a guaranteed power reserve of 65-68 hours. Impressive, isn’t it?

What’s also remarkable about the whole Caliber 39 family is that all of these engines are assembled using deliberately rugged parts. While I can’t say that they dwarf those of more widespread mechanisms from ETA, Sellita, and others, it looks like Eterna didn’t cut corners on these trying to save a penny or two on metal. 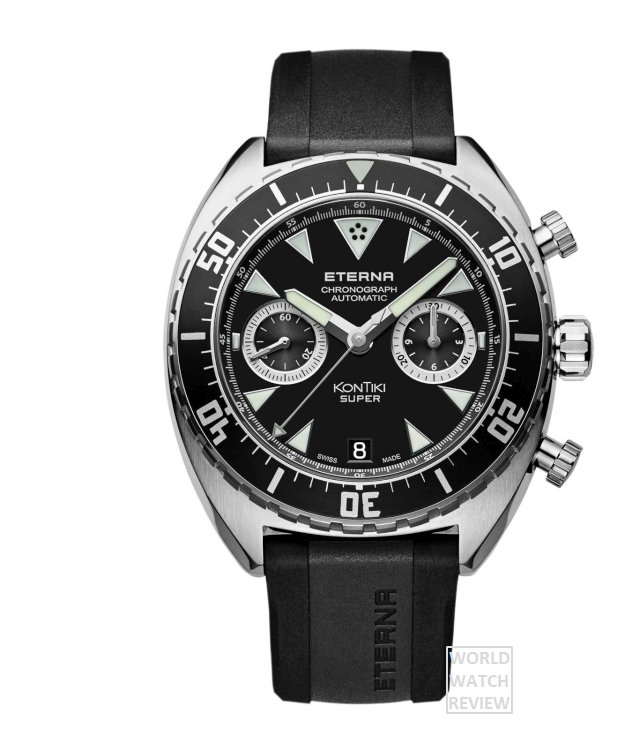 As massive as it is, the movement is built to last, and probably (yours truly didn’t have a chance to actually do an instrumented test of it) offers lots of structural rigidity that may even be excessive for a mechanism designed to work in a normal wristwatch. It surprisingly is also simple in its design, so, even if your local service person has never had a prior first-hand experience with the piece, he or she will probably have absolutely no trouble at doing at least routine maintenance and all the necessary adjustments if need be.

According to Mr. Aaron Berlow of Hodinkee.com, the movement features a couple of parts that Eterna buys directly from ETA [source] and some more that seem to be, um, cloned from similar mechanisms made by the same ETA, but otherwise, the mechanism seems to be made totally in-house.

I am also fairly sure that somewhere along the road the ETA-sourced parts will be replaced with their own as soon as they start to sell to third parties (and, of course, install in their products) enough blank calibers to make building them economically feasible. And also, hey, Eterna is the founder of ETA so, technically, even the outsourced parts have at least fragments of Eterna’s DNA!

As far as finish is concerned, the brand is laconic at offering anything fancier than mildly open-worked oscillating weight with circular Geneva stripes and corporate logo, as well as the same stripes on the bridges, as well as several polished (some of them blued) screw heads. Rhodium plating makes the tiny engine look more expensive, but that’s basically it.

From where I stand, the price is higher than it should have been: the MSRP of CHF 4600 (approx. $4700) is a bit too much for a watch of this kind. Also, it is about $1000 more expensive than the 2014 Longines Heritage Diver Chronograph. I don’t try to demean the Sino-Swiss brand here, but you should take into account that sometimes their older models are sold by online stores at 1/4th or even 1/5th of the original MSRP, which means that you will have to make a serious discount on the price you’ve paid for this timekeeper to fund another piece for your collection.

Still, this is a beautiful timekeeper. If you are reading this review three or four years after it was published (probably in 2019 or 2020,) it means that World War Three didn’t happen yet and the collection is probably available at some $1200, which means that you totally should go for it, but only at that price, give or take $100.