You are here: Home / Archives for Cuervo y Sobrinos Now that’s something big from the Swiss-based brand with its roots going straight to the Caribbean. No, they didn’t introduce a tourbillon with parts made of silicon or some other fancy material from the asteroid 25143 Itokawa brought here by the Japanese space probe Hayabusa. However, this gorgeous Cuervo Y Sobrinos Historiador Flameante (ref. 3130) explicitly states that CyS has a great potential when it comes to “simple” dress watches.

Continuing to celebrate the 130th anniversary of the brand, the now Swiss-based brand of Cuban origin keeps introducing the most elegant timekeepers in its history. Their new Cuervo y Sobrinos Prominente 130° Aniversario (ref. 1015.1CLE), for example, comes packed in an elegant rectangular case with ergonomically shaped integrated lugs and features a refined, highly-legible dial. 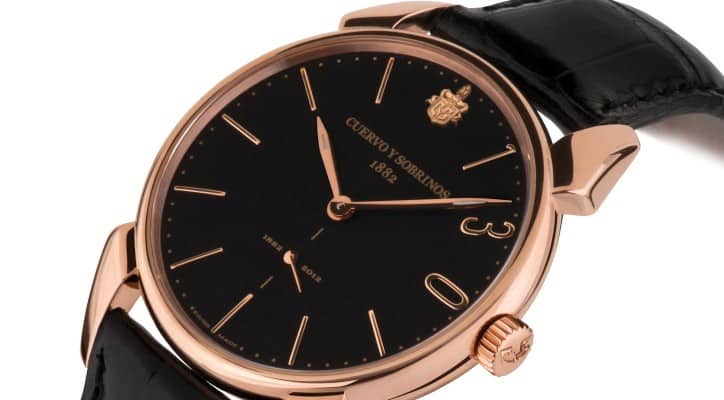 The now-Swiss brand of Cuban origin has recently presented its 2011 Cuervo Y Sobrinos Historiador Retrogrado (ref. 3194.1A) that features a retrograde date display and a power reserve indicator. Still sporting the same deliberately archaic styling of its face and powered by a modified ETA caliber, the new model tries to monetize the watchmaker’s ‘colonial’ legacy and, from where I sit, is successful at that. Cuervo y Sobrinos, a relatively obscure brand that was established on Cuba and is now owned by a Swiss-based company, has presented a new version of their deliciously retro-styled Pirata model. Now called Pirata Complete Calendar Limited Edition (ref. 3051.5NF), it packs the usual functionality of an ETA 7751 caliber into a not-so-common combination of steel, titanium, and bronze.