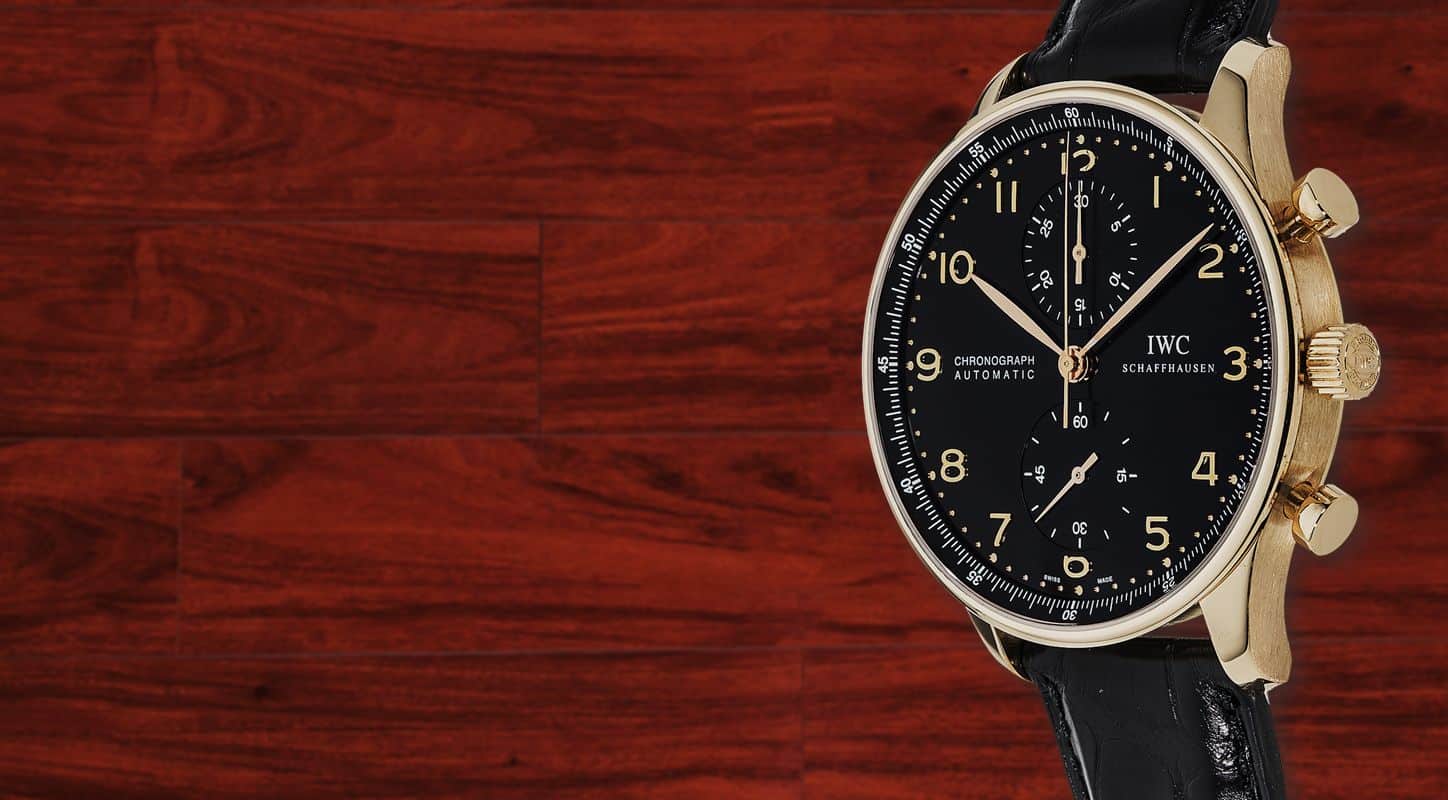 Like the just refreshed Portuguese 7-Days Power Reserve chronograph that IWC plans to introduce either at the SIHH 2010 or a little bit later at the Baselworld show, the 2010 Portuguese Chronograph in Rose Gold (ref. IW371482) has also received a minor update for the next year. It will be presented at the same event.

According to the company, the only thing that will differ the refreshed chronograph from the older model will be the new strap made of black crocodile leather.

As usual, the chronograph will be animated by the IWC Caliber 79350 automatic movement.

It must be noted that the movement IS NOT made in-house: it is a slightly modified ETA Valjoux 7750 caliber with its small seconds sub-dial moved counterclockwise to 6 o’clock and the calendar wheel removed altogether.

Also (excuse me this moment of ranting,) almost all parts of the modified caliber are gold-plated, but for me, it is somewhat of an overkill, like covering a Mercedes-Benz with gold vinyl: doesn’t look any more expensive, but shows everyone that you lack in the good taste department. Luckily, the movement is concealed from envious eyes with a solid case-back.

Still, I must admit that the mechanism, while being mass-produced and present in all sorts of Swiss-made chronographs starting from relatively affordable and going all the way up the price ladder to sub-$20,000 models, is robust and reliable, and, of course, is able of keeping good time if tuned and expected properly before being put in the case. Luckily for us, IWC does all that although I would still prefer to see such a classy chronograph being powered by an in-house mechanism even if they’d have to make a price bump for that.

Thanks to the choice of the caliber, the case looks more slender (or at least more well-proportioned) than other members of the Portuguese family. Being less than 41 millimeters in diameter, it is just over 12 millimeters thick, which will make it feel comfortable when worn with a normal shirt, as it is supposed to be.

While I prefer rose gold to be accompanied by different shades of brown, I must admit that with this kind of strap the watch looks even more intimidating. Perhaps, that was the idea.

There is still no information about the worldwide availability for the new chronograph, but it’s been reported that it will go on sale at a fairly reasonable price of €12,500. With its 18-karat rose gold case, a fine-tuned to higher specs mechanism, and an overall high perceived value of the brand, the price indeed looks justified.