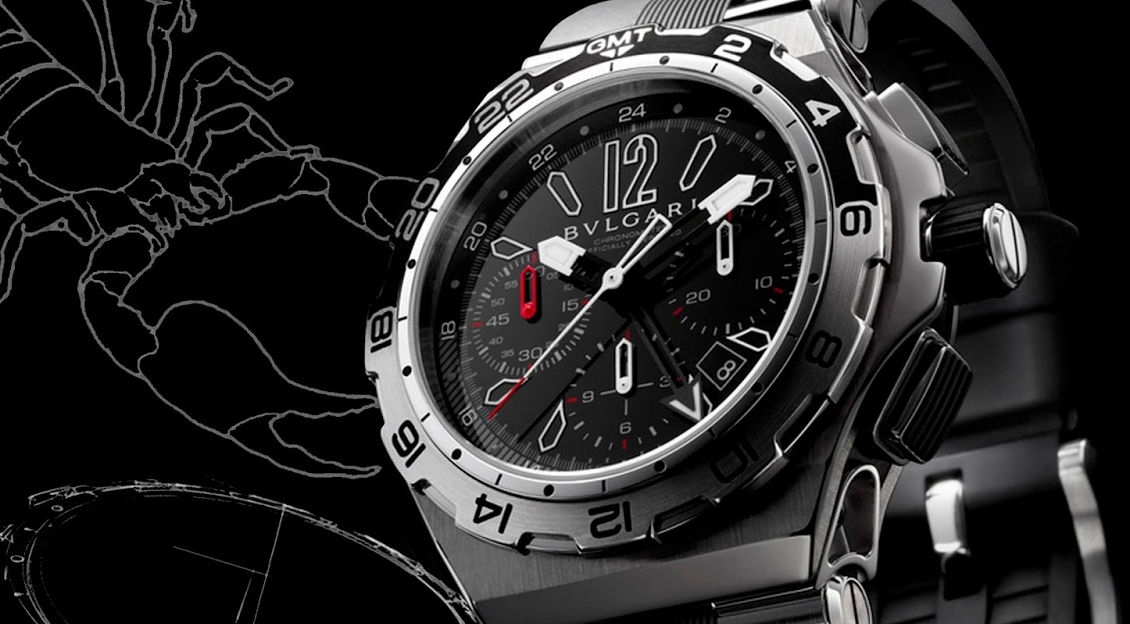 The new Diagono Chronograph GMT X-Pro looks like a piece of techno music mixed by a German deejay. You probably do know the German way of creating a techno mix,

That is exactly how the GMT X-Pro was made.

Its partly PVD-coated bezel comes from Bulgari’s Pro Aria collection; a set of semi-skeletonized hands can be attributed to their Pro Terra DG 40 G CH model, but is also inspired by Hublot’s iconic Big Bang series of sporty chronographs; and the overall layout encased in a huge 45 mm body makes me think about some of Breitling’s timepieces (their relatively recent Avenger Seawolf Chrono Blacksteel chronograph is the first model that comes to mind.)

Inside this chimera ticks an automatic chronograph caliber. Called Bvlgari BVL312, it is in fact a COSC-certified version of the well-known Valjoux 7750 base movement with a La Joux-Perret add-on GMT module. Some bloggers call this device exclusive. However, by the looks of it, the GMT unit may be identical (or closely related) to the one installed in Ebel’s pretty dated 1911 BTR GMT Chronograph, which is also powered by ETA’s omnipresent 7750 powerplant.

The remarks above don’t mean to put the mechanism into negative light: the ETA 7750 is a reliable and dependable mechanism, while La Joux-Perret is a highly reputable maker of complications that sells its modules to serious brands. However, its main problem that the movement still sports the same standard layout as the base caliber.

Hence, the rather standard layout of the dial. If you will take a look at the photos, you will see that the GMT X-Pro features a well-known tri-compax chronograph combination with a 12-hour sub-dial at 6 o’clock, a 30-minute totalizer at 3 o’clock and a small seconds sub-dial at 9 o’clock. The central second hand counts seconds when the chronograph is on. As usual, the small date window is located between 4 and 5 o’clock positions.

What’s particularly interesting about GMT X-Pro is that this collection features not two, but three time-zones! Besides the usual 24-hour scale on the outer part of the dial, it also has a second 24-hour scale on its rotating bezel! Click the bezel to the desired position and the extra hour hand will show you the current time in one more city of your interest! Well, maybe there may be too many exclamation signs in just one paragraph since Bvlgari has already employed the same scheme in some of its other GMT Pro models.

Yes, like with German music, the GMT X-Pro is not particularly original, not to say — inspired, but the beat kinda makes you wanna dance if you know what I mean.

At this time, the Italian brand offers the new wristwatch at a recommended street price of $15,500. This is, of course, a matter of personal tastes matching the thickness of your wallet, but, frankly, I find the price a bit steep for a combination of a mass-produced (however good reputation it enjoys) movement with a pretty simple stainless steel body.