Celebrating its 130th year in business, the Japanese jewelry, and precision instruments-maker has presented its new Grand Seiko 130th Anniversary Limited Edition (refs. SBGW033, SBGW040, and SBGW039) collection, which is going to be available both in Europe and North America. Looking like it’s having the legendary Patek Philippe Calatrava line of minimalistic dress watches in its fine crosshairs, the new Commemorative Edition makes a subtle, but very firm stress on the “Grand” part of Grand Seiko brand.

Being a part of the 130th Anniversary Commemorative Collection, the new family is almost an exact reproduction of the original Grand Seiko timepiece that was released back in 1960.

Back then, the Japanese brand was only setting its foothold in the market of luxury timekeepers and its founder was putting all of its efforts into refining the line daily. The three-hander that was issued more than 50 years ago, made it clear that Grand Seiko was there for the long haul: elegant lines, clean and easy to read dial together with nice mechanism were an indication that people at Seiko knew what they were doing, not simply tried to make an affordable “homage” to a European model. 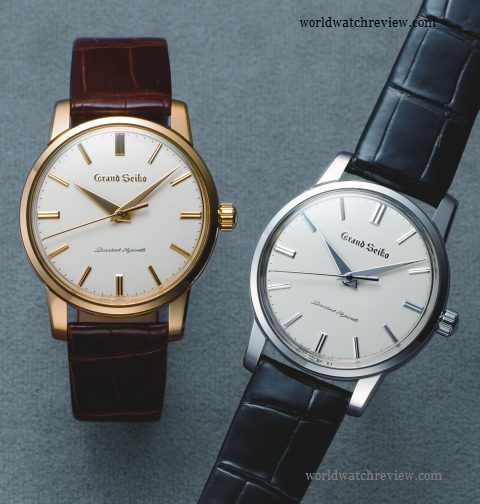 The only major difference between the original and this new “sort-of-re-issue” is that the new model lacks the “Chronometer” inscription under the logo and the small eight-pointed star at 6 o’clock is also gone.

What’s new here is the Caliber 9S64, which is made in-house.

Decorated with the understated elegance one rarely expects from Japanese designers (yes, Lexus, I am looking at you) and, being carefully fine-tuned and adjusted in 6 positions, the movement has a mean daily rate between -3 and +5 seconds per day. This is still years behind an ordinary quartz caliber, yet this mechanical movement may easily qualify for a chronometer certificate at Swiss COSC institute thanks to its accuracy and build quality.

Although the hand-wound mechanism is thin measuring less than 5 millimeters top to bottom, the 130th Anniversary is still a bit of a thicker side with a thickness of 11 millimeters that is further exaggerated by its relatively small diameter of just over 38 millimeters, a de facto standard for a classic dress watch. Still, it feels comfortable when worn with formal attire. While the stainless steel variation is more or less affordable at its €5000 recommended retail price, the model in platinum may leave a huge hole in your budget with its heavy price tag of €23,500. Still, considering the choice of materials, it is not overpriced and is more or less on par with similarly styled timekeepers made by its German and Swiss-based rivals.

The steel version is limited to 1300 pieces and the versions in gold and platinum will be issued in 130 individually numbered pieces each.