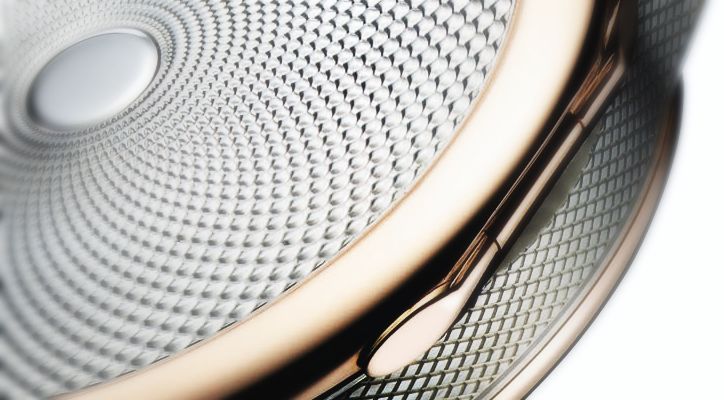 Mostly known for its avant-gardist approach to design, this time the Geneva-based brand decided to take a more classical way. Their F.P. Journe Special 30th Anniversary Tourbillon features everything that you might expect from a highly exclusive vintage-styled timekeeper including a solid hunter-style case back cover with meticulously executed barleycorn guilloche.

Limited to just 99 pieces, this two-tone watch features a rather unusual combination of materials.

Instead of a more common mix of rose gold and stainless steel, this beauty has steel replaced with guilloche silver. The engraving reminds me *ahem* somehow of Breguet watches, which is probably just because this watch was created as a sort of homage to Breguet, as well as other legendary (and some of them now almost forgotten) watchmaking houses of the past few centuries.

While silver, especially when compared to stainless steel, isn’t particularly practical (especially when it comes to making watches that are often subjected to all kinds of abuse), the metal is harder to scratch than, say, white gold. In fact, many antique pocket watches were crafted from this precious metal. They still look great. Although many modern watchmaking brands tend to produce their flagship models in deliberately oversized cases that basically turn them into objects of art that can’t be used as a time measuring tool (at least, on a daily basis), F.P. Journe managed to keep the Special 30th Anniversary Tourbillon just a tad larger than the industry’s dress watch golden standard. Measuring just 40 millimeters in diameter and being only 10 millimeters thick, this precious artifact can actually be worn on a wrist by those who can afford it.

As usual for the brand, the design is as ergonomic as one can get when it comes to vintage-styled timepieces.

The only thing that spoils it a bit is the setting/winding crown. Looking great and executed in the most impressive way, for some people it may be physically unpleasant to interact with. Of course, the main attraction of this watch is hiding behind its engraved hunter’s case back cover. Their in-house F.P. Journe caliber 1412 hand-wound movement not only features a pair of spring barrels that increase its power reserve to 56 hours but also sports a vintage design of its bridges with a strong aroma of the 19th century about them.

Despite its deliberately undecorated appearance (which is, by the way, is deceptive since all of its visible screws -even the smallest ones- are polished and heat-blued, the bridges and plates are sandblasted, and the tourbillon bridge is polished by a skilled hand of an artisan), this is a true Haute Horlogerie caliber. It is not only certified as a chronometer for its high accuracy but also features a finely executed tourbillon escapement that drives the small seconds indicator located at 6 hours and also improves the timekeeper’s isochronicity even further. It is also nice to note the way the tourbillon is hidden from view behind the silver dial: there is something extremely classy in a way this beautiful work of art is humbly hidden behind a thin sheet of solid metal.