For the upcoming holiday season, GP has updated its Cat’s Eye line with an admirable Girard-Perregaux Cat’s Eye High Jewelry (ref. 91702B53P7B1-53A). Powered by their in-house Caliber GP03300-0072 self-winding movement and sporting the same 38×33 mm white gold body as the rest of the family, it is still slightly larger thanks to an absolutely enormous amount of precious stones decorating it from top to bottom.

It is not the first time that the Swiss watchmaker introduces an “Haute Joaillerie” timekeeper. Two years ago, for example, they revealed a gorgeous Cat’s Eye Tourbillon model that, as the name puts it clearly, was equipped with an absolutely stunning tourbillon escapement. With its hand-decorated white gold tourbillon bridge and hundreds of diamonds decorating the dial, the watch featured a level of refinement that is just out of reach for about 99 percent of brands selling their watches with a “Swiss Made” inscription on the dial. Mechanically, this new Girard-Perregaux Cat’s Eye High Jewelry is a lot less complicated beast. The timepiece is equipped with a rather simple mechanism that drives nothing but a pair of hour and minute hands, as well as a small seconds indicator, which is placed at 9 hours.

However, with precisely 645 diamonds that decorate its oval-shaped case, dial and the white gold bracelet, the new Cat’s Eye offers such a degree of luxury that even the most orthodox Marxist out there wouldn’t dare to call this work of art an object of conspicuous consumption.

In this regard, the relative simplicity of the mechanism is actually the best solution: the mechanical part doesn’t draw too much attention to itself, while at the same time allowing for a body, which is just wide and thin enough to serve as a perfect vehicle for the purpose of displaying the diamond-setting prowess of the Swiss brand’s artisans.

According to official specs, the watch measures 38.63 mm in width, 33.63 mm in height, and is just 12.90 millimeters thick, which makes it more than wearable for those extremely rare occasions when its owner will dare to get it out of a safe deposit box and actually step on a red carpet. All in all, the diamonds total almost 50 carats and only the guys that worked on this watch can tell how much highly skilled labor was invested into this watch. Besides the aforementioned emerald-cut diamonds that cover every single square inch of the watch, there is also a huge rose-cut stone decorating the setting crown.

Since there is no place for the logo on the diamonds-paved dial, the inscription is transferred on the front sapphire crystal. By the way, if you take a moment to regard the timekeeper, you will notice that thanks to the way the precious stones are concentrated around the off-centered small second display, there is a certain asymmetrical flare about it that is further emphasized by the logo. Frankly, I experience a mild feat of vertigo every time I look at this beautiful gadget.

As usual, its only problem is that it will possibly cost like a custom-made Rolls-Royce. Well, I guess that was the idea*.

* UPDATE ON PRICE: Oh, at a suggested price of $1,000,000.00 it actually costs like a pair of Rolls-Royces and a Tesla EV with a free bottle of Champagne in its glove compartment. Well, some things are just meant to be expensive. 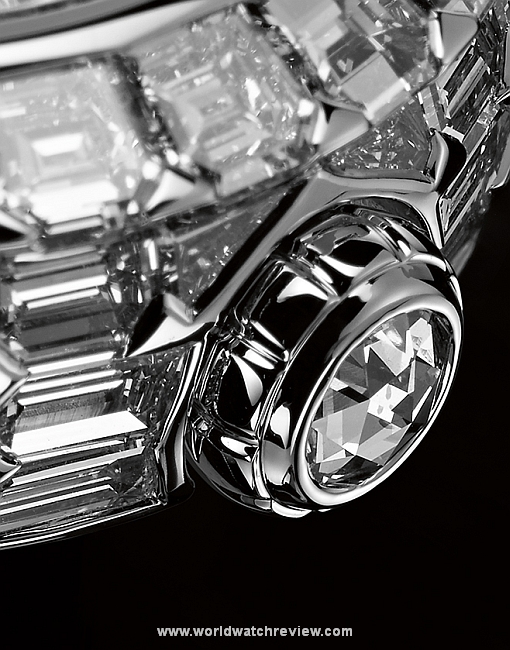