You are here: Home / Archives for Girard-Perregaux

The idea of substituting the usual silvered or enameled dial with a tinted sapphire crystal is by no means new. Corum, for example, used it for its massive Admiral’s Cup Minute Repeater Tourbillon 45, while Omega employed the concept for the gorgeous Skeletonized Tourbillon Co-Axial Platinum. However, this new Girard-Perregaux Vintage 1945 Large Date, Moon-Phases (refs. 25882-11-223-BB6B & 25882-52-222-BB6B) (ah, that descriptive naming!) looks like one of the most exciting “regular” models delivered by the brand during the recent couple of years. When it comes to wristwatches, a name says it all. I mean, what part of Girard-Perregaux Traveller Large Date, Moon Phases & GMT a person with an IQ just slightly above that of an average bath rug wouldn’t understand? However, when it comes to timekeepers issued by GP, there is much more to them than just a list of features. What you get, is an extremely finely crafted accessory that features a level of refinement that you will rarely meet even in its price range. The 2014 Girard-Perregaux Dual Time, which is delivered in a rose gold body with a choice of two dials in vintage ‘Off-White’ (ref. 49544-52-131-BBB0) and more modern ‘Anthracite Gray’ (ref. 49544-52-231-BB60) colors, offers that killer combination of great, well-designed exterior and reliable, time-proven automatic movement that only brands of this caliber can achieve. Although the complication itself is not rare (and I am putting it mildly), and its realization is not terribly innovative, the final product still makes a strong impression.

Girard-Perregaux has presented this 1966 Lady (Ref. 49528D52B871-CKBA) model in July 2014. Offered in a delicate, meticulously crafted and painstakingly finished with diamonds 18-karat rose gold case, the timepiece not only features the usual for the brand elements of industrial design but also manages (quite easily, at that) to play on the same field with such monsters as Patek Philippe and Vacheron Constantin. Sporting a finely decorated in-house self-winding movement and delivering a nicely balanced mix of materials, this new model is one of the most interesting “simple” timekeepers presented by the company during the last couple of years. The 2014 Girard-Perregaux Chrono Hawk Pink Gold (Ref. 49970-34-633-BB6B) sports traditional for the Swiss brand extremely well-balanced look that comes as a successful combination of good taste and almost unrivaled design skills. While the new timepiece has a number of elements that are a bit too ahem stylized, they somehow manage to be organic when you look at the gadget as a whole. I have a strong suspicion that GP uses some sort of magic to make such beautiful accessories. First revealed in its current form in 2011 (its signature shape, however, was introduced in 2002) and slightly refreshed in all the right places back in December 2012, the Sea Hawk family has been expanded with a new variation. Called Girard-Perregaux Sea Hawk Cobalt Blue and available either on a blue rubber strap (ref. 49960-19-431-FK4A) or a bit less flashy, but a lot more practical stainless steel bracelet (ref. 49960-19-431-11A), the diver makes an even stronger impression. In fact, it radiates such a strong presence that you would probably need to wear Dr. Freeman’s hazmat suit just to walk into your nearest Girard-Perregaux boutique to see the watch in person. For the upcoming holiday season, GP has updated its Cat’s Eye line with an admirable Girard-Perregaux Cat’s Eye High Jewelry (ref. 91702B53P7B1-53A) watch. Powered by their in-house Caliber GP03300-0072 self-winding movement and sporting the same 38×33 mm white gold body as the rest of the family, the watch is still slightly larger thanks to an absolutely enormous amount of precious stones decorating it from top to bottom. 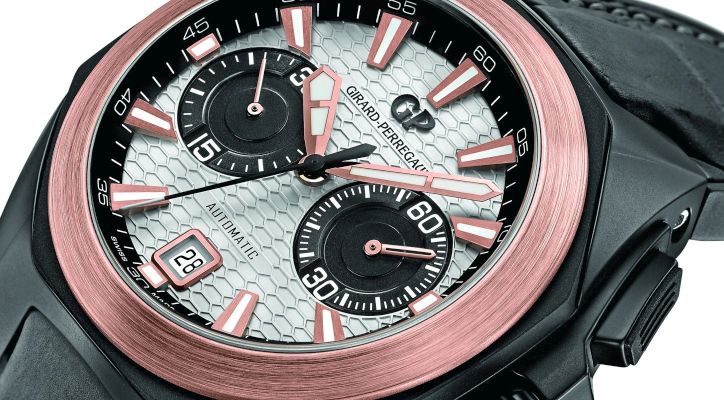 The 2014 Girard-Perregaux Chrono Hawk Hollywoodland (refs. 49970-34-132-BB6A and 49970-34-232-BB6A) looks like a normal version of the model that was first introduced during Baselworld 2013 event but has its steel body swapped for an extremely scratch-resistant ceramic one. Last year, the Swiss watchmaking brand has expanded its Vintage 1945 collection with a beautiful automatic chronograph. A version in rose gold retailed for more than €26,000, so a version in stainless steel, twice less expensive, was introduced in parallel. It looks like the version in steel proved more successful among connoisseurs, so, this year, the company presents an updated version: the 2013 Girard-Perregaux Vintage 1945 XXL Chronograph in Steel (Ref. 25883-11-221-BB6C). Girard-Perregaux has a long history of building highly refined (and often mind-blowing) wristwatches for the world’s elite customers. In 2013, the brand added a nice entry to its Traveller collection. Although the Girard-Perregaux Traveller Moon Phases and Large Date (refs. 49650-11-131-BB6A, 49650-11-631-BB6A & 49650-82-231-HBBA) lacks a second time zone indicator or even a city disk (something that you often expect from a traveler’s companion), it can be a nice acquisition for a proud member of a Million Miles Club.