Like the, um, sporty Sporting Chronograph Ceramic that the American fashion house has presented back in October 2012, the new automatic Ralph Lauren Sporting World Tim (refs. RLR0210700 & RLR0210000)e comes in a noticeably oversized body, but has the sexy black ceramic swapped for a less expensive, but very imposing, satin-brushed stainless steel. The list of functions, as the name of the piece clearly states, has also been edited in favor of a nicely done GMT display.

he Italian watchmaking giant Officine Panerai will soon start selling a number of limited edition Radiomir models based on their P.2003 automatic movement. Designed and built in-house, the movement was introduced back in 2006 and offered a nice combination of complications together with a stunning power reserve of whole 240 hours. According to the brand, the new Panerai Radiomir 10 Days GMT is going to be released in three bodies, with the version in platinum (PAM495) being the most expensive among them. Presented in a white composite body, this new Girard-Perregaux WW.TC Chronograph White Ceramic (Ref. 49820-32-712-FK6A) is inspired by the gorgeous an ultra-limited (only five individually numbered pieces were ever made) edition Girard-Perregaux ww.tc Cabinet de Curiosites Thomas Erber (Ref. 49820-32-788SFK6A) that was created for the 2011 Cabinet de Curiosites event in London.

Officially presented at the 2012 JCK Show in Las Vegas at the luxurious Mandalay Bay Resort & Casino, the automatic Girard-Perregaux WW.TC Dark Knight Worldtimer (ref. 49820-32-612-FK6A) will soon be offered to -ahem- general public in a super-limited lot of only 25 numbered timepieces. We are yet to see one in flesh to write a more comprehensive review of this thing but, so far, it looks like the model is based on the Web 2.0-style, super limited edition ww.tc Cabinet de Curiosites Thomas Erber (Ref. 49820-32-788SFK6A) that was first revealed back in October 2011 to much acclaim of reviewers and enthusiasts. It looks like the year 2012 will be remembered by many as the year of “world timers”. Right after the stunning Transocean Chronograph Unitime by Breitling, somewhat ascetic Pilot Worldtimer (Ref. IW326201) by IWC, and the special edition World Timer ALT1 Automatic UTC by Bremont, the Swiss watchmaker Zenith offers its new Pilot Doublematic family that is available both in stainless steel (Ref. 03.2400.4046/21.C721, which is reviewed here) and more expensive 18-karat rose gold cases. The collection was revealed a couple of weeks ago during the Baselworld 2012 event.

The solar-powered 2012 Casio G-SHOCK GW-A1000-1ADF was presented at Baselworld 2012 (you don’t see many Japanese watchmakers in Basel, do you?) The gadget features the same Smart Access technology that we have recently seen on an all-analog ProTrek PRX-7000T “aviator”. Using a revolutionary five-motor drive and an electronic crown switch, the system makes operating the gadget’s numerous functions as easy as it can possibly get without using a touch-based interface. And with its radio-controlled Multiband 6 system, this is also one of the most precise time measuring devices that money can potentially buy. 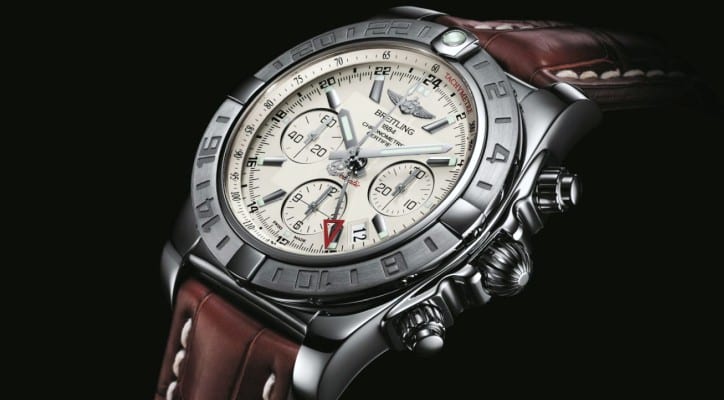 Next month, during the upcoming Baselworld 2012 industry fair, the Swiss watchmaker will introduce a new member to its constantly growing Chronomat family of chronographs. Called Breitling Chronomat GMT 44mm, the new automatic wristwatch will be presented in a less intimidating stainless steel body only 44 millimeters in size. Equipped with a second time zone indicator, a chronograph and a date display, the watch delivers practically all functions that you can expect from a “sporty” timekeeper.