The new Chr.Ward C9 Jumping Hour MKIII features a refreshingly new design. Not just clean and easy to read, it is also extremely refined. Apparently, the guys who designed this beautiful timekeeper were in the proverbial “zone”: they did everything right.

It is always more productive to put things in perspective, so I am going to compare the new MKIII to the 2011 C9 Harrison Jumping Hour: time indeed flies.

The first thing that gets attention is how light the new version is! Influenced by the principles of Bauhaus design, the new C9 MKIII features a clean white dial. The spider web-style guilloche-like pattern of the 2011 model was completely erased. The minute ring of the original is, too, gone. The move contributed to further lightening up of the timekeeper’s face. Also, it allowed shrinking the gadget’s case without compromising legibility. Speaking of size, this refreshed version of the 2011 watch became a bit smaller. It is still a tad over 13 millimeters thick, but its diameter has shrunk by three millimeters. The watch now measures 40 mm in diameter without the setting crown.

This puts the gadget closer to the informal “golden standard” set for dressy watches at 38-39 millimeters in diameter. The timepiece now looks a lot better on a wrist of normal proportions taking less space and requiring less attention. Christopher Ward decided to replace the Arabic numerals on the chapter ring with polished stick-shaped hour markers. Matched by a single needle-shaped minute hand, they make the dial look cleaner and lighter. The black minute hand looks more contrast on the matte-white surface of the dial.

Yes, as you have already noted, there is only one hand on this dial. The other one is replaced with a Jumping Hour indicator that stays at its usual position at 12 o’clock.

The indicator’s aperture is now a bit larger to accommodate larger Arabic numerals. For the sake of legibility, the pretentious Roman numerals were replaced with something more familiar to our eyes. 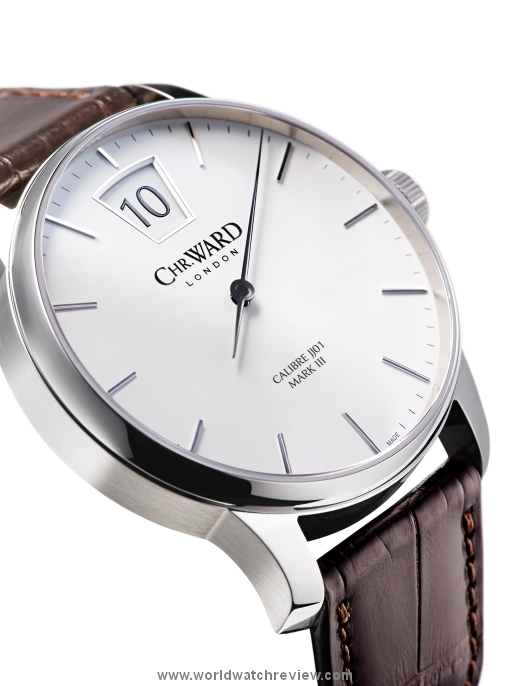 According to their press release, the “jumping hour” complication is still produced by the same Johannes Jahnke. Still in his early thirties at the moment of writing this review, the young German entrepreneur has earned a reputation of a talented watchmaker and a skilled engineer.

The self-winding mechanism that powers the watch is called Caliber JJ01. It’s a combination of an ETA 2824-2 base and an add-on module that is responsible for this beautiful complication. If you live somewhere in the EU, the company will charge you just £995 (around 1350 Euro) plus shipping expenses. If you happen to live in some other place, they will subtract the British VAT from the final price, so that the wristwatch will be even less expensive. The technology used in this watch maybe not be as groundbreaking as the one that drives the revolutionary A. Lange & Sohne Zeitwerk. Still, even as it is, the “Jumping Hours” complication is usually available only to a lot more expensive devices from established brands. A watch with such a nice complication that costs less than €1500 is more than a bargain: it is almost a steal.

The Chr.Ward C9 Jumping Hour MKIII is already available for pre-order. We expect the first bunch of them to be delivered sometime in mid-March 2015.