You are here: Home / Archives for Christopher Ward The 2018 Christopher Ward C1 Grand Malvern Worldtimer (the model with reference number C01-43AWT2-S00W0-CC with a “Camel” leather strap is reviewed here, but there are two more versions available with “Tan” and “Blue” leather bands,) is the young watchmaking brand’s latest attempt to conquer the niche of dressy ‘UTC’ watches. This time, it offers a better-calculated combination of good quality, great exterior, and a nice automatic movement that is equipped with a complication that is manufactured exclusively for Chr. Ward by its long-standing Swiss-based partner. Already available for pre-order with the first bunch of them expected to be delivered mid-March 2015, the new Chr.Ward C9 Jumping Hour MKIII features a refreshingly new design, which is not just clean and easy to read, but is also extremely refined. It looks like the guys that designed this beautiful timekeeper were in the proverbial “zone”: they did everything right.

The limited edition 2014 Chr. Ward C70 3527 GT (ref. C70-3527GT-SRK) was inspired (and also heavily influenced) by chronographs that were selling back in the 1960s and, perhaps, 1970s. Cheerful (and even playful), it features the signature exaggerated minute track designed to look like gauges on a sports car’s instrument panel, and a contrast color scheme for its busy dial, but is powered by a way more precise thermo-compensated quartz movement. Designed and manufactured by ETA, it surpasses any “normal” quartz caliber by an order of magnitude when it comes to the tiny amount of time it gains or loses during a whole year of operation.

Limited to just 500 numbered pieces, the Chr. Ward C7 Italian Racing Red Chronometer will try to replicate the success of the last year’s C7IRR model that (as the British brand claims in their press release) was sold out in a matter of weeks. Priced well below $1000 mark and featuring a high-end Swiss quartz movement, the watch is almost destined to succeed. Considered by many enthusiasts as an entry-level “Swiss Made” watch of choice, the Trident C60 has recently got significantly smaller. Since the bulky 42 millimeters of the original model were often too massive for buyers of the skinnier type, this 38-millimeter Chr. Ward C61 Trident-Pro will fit any medium- and small-sized wrist. And if you think that orange is just too bright for you (and it is, just trust me), there are two more color combinations to choose from. 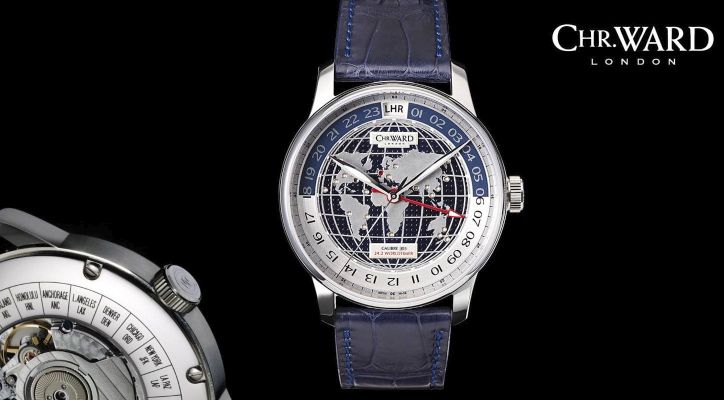 Christopher Ward has finally caught that ‘worldtimer’ superbug that keeps infecting European watchmakers at an alarming rate. Still, their new Chr.Ward C900 Worldtimer offers an unusual combination of functions: it not only tells you time both in the home and the second time zone, but also displays a three-letter airport code that makes it a tad easier to always set the correct time in the place of your current stay.