The 2018 Christopher Ward C1 Grand Malvern Worldtimer (I review here the model with reference number C01-43AWT2-S00W0-CC with a “Camel” leather strap, but there are two more versions available with “Tan” and “Blue” leather bands,) is the young watchmaking brand’s latest attempt to conquer the niche of dressy ‘UTC’ watches. This time, it offers a better-calculated combination of good quality, great exterior, and a nice automatic movement equipped with a complication manufactured exclusively for Chr. Ward by its long-standing Swiss-based partner.

Christopher Ward has finally unveiled a new member of the C1 Grand Malvern collection that features an interesting take on the good old concept of a “worldtimer”: a double-time-zone watch that is characterized by a city disk added to the dial for better readability (or just for aesthetic’s sake.) This new piece looks like a reboot of their 2013 Chr.Ward C900 24:2 Worldtimer GMT model. The “24:2” part means that it sports not one, but two(!) 24-hour displays while a normal GMT/UTC dial often features one standard 12-hour indicator and one 24-hour pointer.

Getting more upscale thanks to the new rotating dial (more on that below) that is now more in line with the elegant styling of other members of the Grand Malvern collection, the watch has also surprisingly got approximately 40 percent cheaper. I am not sure whom we should thank for this development, but, thanks to the decrease in price, its “value for money” ratio has skyrocketed to at least 4.5 points out of five. After all, the combination of a time-proven caliber with an exclusive complication module and a gorgeous exterior makes this one an obvious choice for those on a tight budget.

Members of the C1 Grand Malvern collection previously came only in one 40.5mm case that could be called medium-sized by today’s standards. Before first checking the specs, I expected the C1 Worldtimer to arrive in the same compact body, but the British brand decided to make it a bit larger.

According to official specs, the case measures 43.5 millimeters in diameter and is about 52 millimeters from lug to lug, which makes it more like an ‘oversized’ one. It may not be as large as the 2012 Breitling Transocean Chronograph Unitime worldtimer that measures whole 46 millimeters in diameter, but it certainly is large for a dress watch with an enhanced display of time. Well, at least, compared to other competitors, it is deliciously slim measuring less than 12 millimeters from top to bottom, which makes it a lot more comfortable to wear with a business suit than the aforementioned Transocean.

You will still have to operate all the functions by the same single crown at three o’clock.

I would prefer to set the City Disk by a bi-directional rotating bezel, but I also understand that Christopher Ward tried to keep the gadget’s exterior as clean and simple as was practically possible, even if it meant sacrificing a tiny bit of usability. After all, the algorithm by which the C1 Worldtimer is operated is simple with one position used to operate the primary time zone and the other reserved for the secondary one (turning the crown clockwise allows you to rotate the secondary disk with an orange “radar beam” painted on it while turning it the other way around allows you to select your current time zone.) The crown itself looks very stylish thanks to the new “twin flag” motif that adores all of their recent timekeepers.

As with the aforementioned 2013 Chr.Ward C900 Worldtimer GMT, Christopher Ward uses the same ETA 2893 self-winding caliber that is equipped with the same JJ03 complication module. Designed by Johannes Jahnke (the same Swiss-based watchmaker who created the Big Moonphase complication for their 2015 C9 Moonphase Automatic and the “jumping hour” module for the C9 Jumping Hour MKII model that went on sale in 2015,) the module turns the main hour hand that was originally designed to circle the dial once every 12 hours into a 24-hour pointer -the same as the secondary GMT hour hand- turning a normal GMT watch into a slightly easier to read dual-time one (Fun fact: some brands that want the same functionality on a budget simply remove the 12-hour pointer and use the secondary 24-hour hand to point time on the dial and a rotating bezel. Check this ruggedly brilliant Glycine Airman 1953 Vintage Edition (ref. 3904.14.TB9) for example.)

This particular version of the caliber goes even further and replaces the GMT indicator pointer with a revolving “time disk” making the dial even more legible once you get used to the new dial.

The movement’s finish, too, became ever so slightly more upscale, mainly thanks to the new design of the oscillating weight. Now featuring a Colimacon finish with the “CHRISTOPHER WARD” inscription filled with deep blue lacquer, the mechanism makes a lot stronger impression than the one that powered the 2013 version that featured nothing more exciting than the usual vertical stripes and the old “CW” logo. To understand how proud the British brand is about the refinished caliber, just look how wide is the new opening on the screw-down back: they did their best to show the modified ETA 2893 in all of its classic glory. The rest is standard. Like many ETA calibers designed to power “affordable” watches, the mechanism is built on only 21 jewels, its balance wheel oscillates at a standard 28,800 vibrations per hour, and its mainspring can store enough energy to power the movement for at least 40 hours after being fully wound. Simple, efficient, easy to repair. Jolly good.

Chr. Ward doesn’t say anything about how the mechanism was adjusted, but the official +20/-20 seconds per day rate of deviation says enough: in terms of accuracy, it’s nothing to write home about. Also, given the timekeeper’s relatively low price point, I would also suggest saving some cash for an inaugural visit to a service station for some proper regulation work. Other than that, ETA 2893 is a great workhorse caliber that is definitely worth its money.

The gadget’s face has a nice three-dimensional look to it with the convex profile matched by the long minute hand that is slightly curved towards the chapter ring. The 24-hour ring (it also acts as a simple day/night indicator) is visually separated both from the “city disk” and the “world map.” I also like how the razor-thin bezel’s machine-brushed inner surface nicely contrasts the white-enameled parts of the dial. 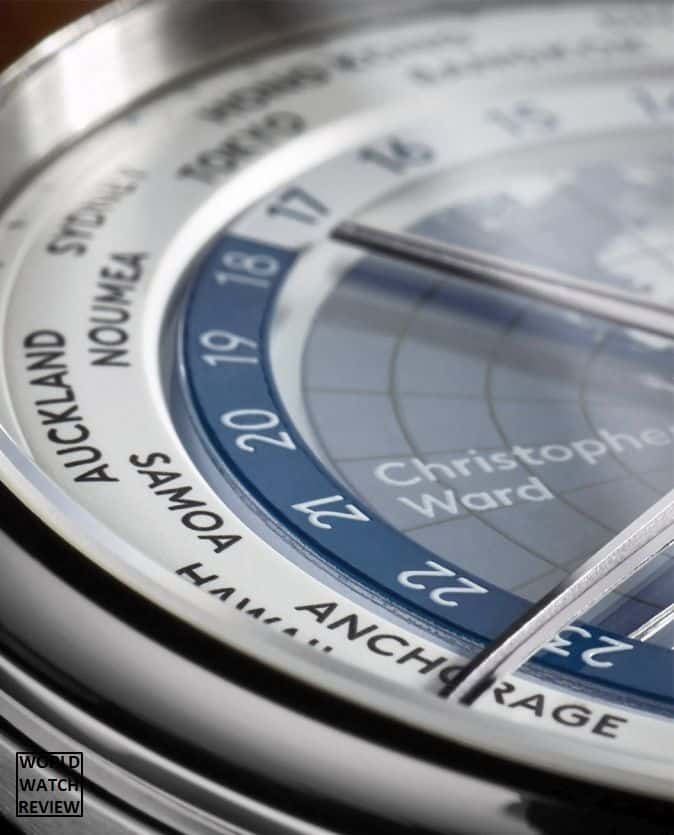 The rotating dial now features only a map of the Northern Hemisphere (those living down under must feel mildly offended by this development) with the black grid printed on the front side of the transparent crystal and the continents on the rear. The orange “Radar” marker on another rotating disk that has replaced the traditional GMT pointer gives the gadget’s face an even better sense of depth.

It’s amazing how, utilizing such a simple set of tools, the British watchmaker managed to create a “worldtimer” that looks as simple and clean as an ordinary “classic” three-hander.

Like with most worldtimers, legibility here, too, suffered a bit of a blow, but I would still say that the watch is still easy enough to read as long as you get used to the unconventional 24-hour display. Regretfully, nighttime legibility is not great. First, they decided to use a C1 Superluminova lume, which is not the brightest among available compounds. Second, with the luminous substance being limited only to the hour and minute hands, the watch rapidly turns into a simple one-time-zone device as soon as the lights go off.

Christopher Ward originally entered the business as a maker of entry-luxury timekeepers, but, at some point, decided that it’s ready to compete with established brands and started to charge outrageous money for their timekeepers. For example, Chr.Ward has initially offered the 2013 C900 Worldtimer GMT at a mind-blowing price of £1575, which, at that time, roughly translated to €1900/$2400.

Apparently, their sales figures were less than reassuring, so, at some point, they slashed the price to less than £1000. Chr.Ward currently offers this particular model at £995: still a bit overpriced to my taste, but not unreasonably so. I would say that its “value for money” rating deserves at least four and a half stars out of five. They even offer financing -great if you are looking for a last-minute birthday, Christmas or Hanukkah gift- with payments starting at just over £66 per month, which makes the deal even more lucrative.