Designed for a person who thought that Ulysse Nardin’s earlier Diver Chronometer 44 was too pricey, too big, and too cluttered for a diver (or, perhaps, for a person who is happy with the watch and wanted to augment their collection with a simpler version,) the 2018 Diver 42 automatic three-hander offers a beautiful, clean exterior, superior build quality, and a mechanism that, alas, is a bit too simple for the price that the brand asks for this thing.

With the Diver 42, Ulysse Nardin builds on the success of their Diver Chronometer 44 collection that was introduced at the end of 2017 as a 2018 year model. Bloggers and professional reviewers received the collectin with lots of enthusiasm. Yet, it was the people who can actually buy a watch that retails for $8000-$12,000 USD whose opinion really matter, so Ulysse Nardin decided to make a more Spartan version of the Chronometer.

As you can see on the image below, they preserved the general styling of the Diver Chronometer with the main visual changes reserved to the size of the stainless steel body and the number of pointers on the dial: the Ulysse Nardin Diver 42 is a classic three-hander with clean and easy to read layout. The choice of colors (especially the model with a black dial) and textures would probably make it a good “James Bond watch” if only the spot wasn’t occupied already by the legendary Omega Seamaster. The case measures just 42 millimeters in diameter: one can even describe it as a “medium-sized” one by modern standards.

This model is approximately two millimeters smaller than the Diver Chronometer that it’s based on.

Yet, understanding that some of their customers may want to have both models in their weekly rotation, Ulysse Nardin tried to make the experience of switching between the three-hander and the chronometer as seamless as practically possible. It looks like both versions have the same profile, the same exterior, and the same finishing touches (the case even comes with the same plaque on the right side of the case as the limited edition model, although, for obvious reasons, the plaque is left blank.) Unlike their earlier divers, the new Diver 42 doesn’t feature a set of crown guards leaving the crown potentially vulnerable to occasional shocks. Unless you plan to use this timekeeper as an “activity” or “tool” watch, this looks like a small price to pay for the visual lightness and overall minimalistic look. Also, it makes the Diver 42 stand out among other luxury divers, especially those influenced by such timeless icons as the Submariner and the Sea-Dweller.

The bezel, too, was designed with aesthetics being the primary objective here, but it looks like its exquisitely sculpted shape will provide a good grip when (and if) at some point you’ll decide to use the Diver 42 as a very expensive egg-timer. The only thing that I miss here is the Superluminova.

It is common for dressier divers to lack in the legibility department. Yet, the gadget would become a lot more usable (although not as aesthetically pleasing) if the Swiss brand’s product designers managed to find a place for just a small single drop of a luminous compound on the bezel. The spot of Superluminova would serve as a point of reference for those common occurrences when one needs to read time at night. The Chronometer 44, for example, didn’t have this problem since the power reserve indicator in the upper half of the dial served as a clear reference point of where the 12-hour marker could be found. As for the choice of straps, it is deliciously rich. According to official specs, Ulysse Nardin is going to offer the collection not only with the usual steel link bracelet or a trendy NATO-style fabric strap, but also on a luxury leather band, and, my personal favorite, a marvelous steel mesh bracelet that seems like the best choice for a version with black dial.

In their earlier three-handers (like, for example, the 2013 Maxi Marine Diver (Ref. 266-33-8C/922) and more elegant 2009 Classico COSC,) Ulysse Nardin used slightly modified versions of the then-omnipresent ETA 2892-A2 automatic movement. Robust and reliable, they were the obvious choice when you needed to build a luxury watch that wouldn’t give your service partners headaches during (and long after) the warranty period. However, after ETA SA significantly reduced the number of their calibers that it used to sell to third-party brands, the mechanisms became harder to come by and Ulysse Nardin decided to make a switch to a “generic” version of the movement. The caliber in question is, of course, the Sellita SW300: another workhorse mechanism that is often regarded as the 2892’s clone, therefore, making the adaptation curve as flat as possible for the manufacturer and their numerous service partners.

This particular iteration of the mechanism is called Caliber UN-816. Beating at the same 28,800 vph, assembled on 25 jewels, and offering a standard power reserve of 42 hours, the mechanism is easy and inexpensive to service and is as reliable as a hammer. Also, it was modified to better suit the UN’s higher standards. A decade ago, Ulysse Nardin didn’t have to worry about the “value for money” ratio of their timepieces: there were hundreds of thousands -if not millions- of people with more than enough money to spare for a piece of conspicuous consumption if it had the right brand name on its dial (or radiator grille.) But then the number of such people was considerably reduced with the majority of them -figuratively- strangled, gutted, decapitated or killed in even more exotic ways by Adam Smith’s invisible hand, and selling watches without a strong “story” (or, at least, a unique movement inside) at a significant markup became a lot more difficult task.

Some brands, like Breitling, managed to adapt in a dizzyingly swift fashion introducing their own “simple” calibers, some went out of business. Ulysse Nardin decided to take an ace out of their sleeve and modified a third-party mechanism with expensive silicon parts: something that it has a ton of experience working with since the time they first introduced the gorgeous Sonata Silicium Limited Edition back in 2008. Although the modified parts surely won’t turn the modest workhorse movement into a working man’s version of the Rolex cal. 3135, their extremely lightweight, resistance to wear, and inherent antimagnetic properties significantly increase the SW300’s value. 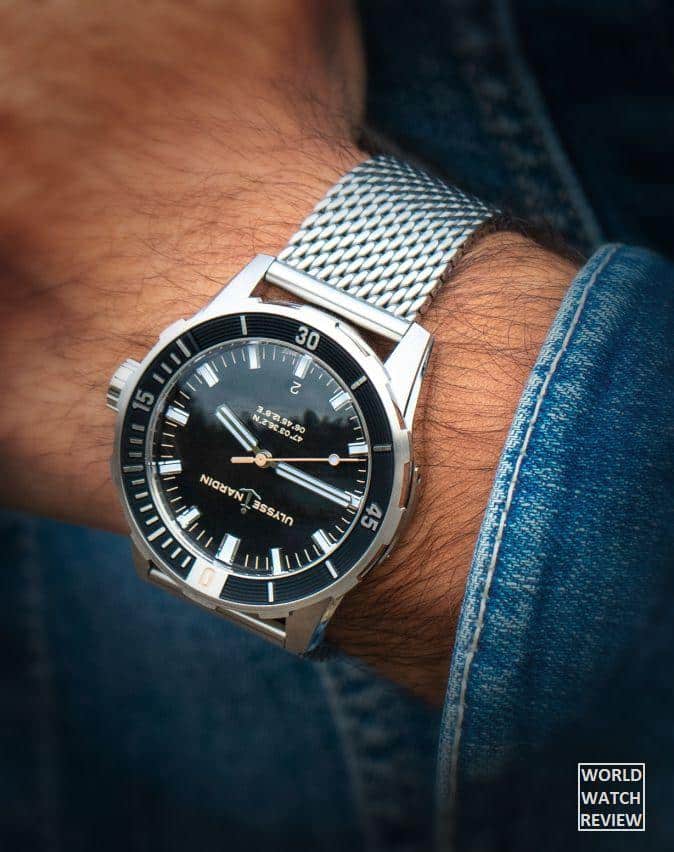 I wanted to give the Diver 42 five stars out of five when it comes to overall legibility and readability, but the lack of Superluminova on the bezel ruined everything. Okay, not everything, of course, but it lost half a star in this part of the rating. The problem could be mitigated by a more prominent (or visually different from the rest of the pack) hour marker at 12 o’clock, but, again, no such luck. Yet, apart from this minor annoyance, the dial of the Diver 42 is almost perfect. It is clean and elegant, there is absolutely no visual clutter, and there is just enough lume on the baton-shaped hands and applied hour markers for time to be read at any lighting condition. What I like about expensive watches is that most of the brands that sell them don’t try to save a nickel here and a nickel there (I am looking at you, Apple) to improve their bottom line. The gadget’s exterior dimensions were reduced by approximately five percent, and Ulysse Nardin could probably use the same set of hands of applied hour markers to decorate the dial, but it looks like they decided to make many new ones that, too, were proportionately reduced to better fit the slightly smaller dial opening. Even the circular aperture for the simple calendar is smaller than that on the aforementioned Diver Chronometer, although the readability of the date function suffered a bit. Now, this is what you should get while buying a luxury timekeeper: a watch that looks complete and organic like a tailor-made suit. The coordinates of the town of Le Locle in the lower part of the dial look a bit gimmicky to me (I have an impression that it is here mostly to serve as a counter-weight for the huge Ulysse Nardine logo in the upper part of the face,) but at least the inscription does its job very good.

The Ulysse Nardin Diver 42 will come on sale at the beginning of the year 2019. At €5800 – 6800, it is overpriced if you take into account the plebeian movement that powers it. On the other hand, if money wasn’t an issue, yours truly would be the first one to throw a handful of cash into the monitor demanding the Swiss brand to take his money right now. I mean, the watch is so beautiful, it almost hurts.